The Poetry and Music of Voice

The Poetry and Music of Voice
by Teresa Reasor
The voice of fiction sings to the reader as clearly as any vocalist who croons a melody.  But just as a choir is made up of a variety of strong and pure, or thin and reedy voices, so are the voices that speak through the written word.
Voice speaks through the devices of plot, character, dialogue, description, tone, style, pacing, and theme.  But how?
Wanting to strengthen my own voice, I decided to find out.  I chose three writers who have distinctive, strong voices:  Joanne Rock, Catherine Mann, and JoAnn Ross.  All three are contemporary writers.  All three have voices that sing on the page. 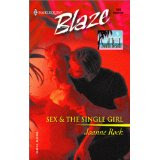 In her rereleased September 2010, Harlequine, Blaze, Sex and the Single Girl, Joanne Rock’s turns of phrase jump off the page with an energy that’s natural and inherently part of her voice. Every sentence is constructed to convey a story within a story.

Real life collided with the image on the monitor as Brianne walked in on Aiden and the cigarette girl in a liplock to set a woman’s heart racing.  The stacked little blonde pressed every one of her considerable curves against Aiden and practically climbed her way up his tall body.

In two sentences Joanne has nearly constructed an entire scene, but she’s also done much more.  She’s paced those two sentences in a snappy rhythm that invites the reader to jump from one to the other by using words that convey action--even when they’re not used as verbs.  Collided, walked, set, racing, stacked, pressed, climbed.  Her words punch the imagery she uses into the reader’s consciousness.
The word liplock, a colloquialism, has an onomatopoeic zing to it. It stamps an immediate image in the reader’s mind of two people kissing one another with the inseparable intensity of a suction cup on glass.
The stacked little blonde pressed every one of her considerable curves against Aiden and practically climbed her way up his tall body.

With the phrase considerable curves, Ms. Rock uses alliteration to enhance the rhythm of the sentence. The sound of the C is repeated in the verbs collided and climbed and the words stacked and practically tying the whole paragraph together.
Do you feel the snappy beat of Joanne Rock’s voice yet? If not let’s continue a little further into the scene.

Instead, she steeled herself against the sultry overload of hormones in Honeymoon Heaven and took command of the room in her best director voice.
“Am I interrupting something?”
Aiden Maddock had been waiting to hear that throaty purr all night.
He hadn’t particularly wanted to hear it while he had Daisy Stephenson clinging to him like a honeysuckle vine.

Once again look at the words that convey action.  Steeled, overload, took, command, interrupting, waiting, hear, purr, wanted, clinging.
Listen for the alliteration again.   Hormones in Honeymoon Heaven.
Look at the concentrated imagery she conveys in the phrases sultry overload, throaty purr, and the Simile she uses in the last sentence, clinging to him like a honeysuckle vine.

Do you feel that sassy sizzle in the tone she sets in just these few paragraphs with the word choices she’s made?  That’s her voice, completely natural for her and impossible to imitate, with any consistency, by anyone else. 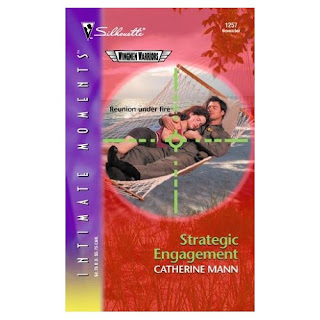 Catherine Mann writes for Silhouette Intimate Moments.  Her special ability to weave emotional intensity into almost every paragraph through internal and external dialogue makes her voice rich and full.  Here’s an excerpt from her Wingmen Warrior, 2010 rerelease, StrategicEngagement.

“I’m so damned scared, Danny.”
Mary Elise’s thready words barely whispered against his neck until he might have questioned his hearing.  But he felt each word and all her fear soak into him along with the heat of her rapid breaths.
“Tell me,” he coaxed.  “Tell me what to do for you.”

Look at Catherine’s action oriented word choices.  Scared, whispered, questioned, felt, soak, coaxed, tell.
Feel the intimacy building between the characters in the turns of phrase, whispered against his neck, felt each word, fear soak into him along with the heat, and even in the dialogue tag, he coaxed. Even though the dialogue is about fear there’s a sensual push and pull going on the entire time that connects the characters on an elemental level.

She inched back, her hand sliding up his face again.  “Oh Danny, can’t you see that you and all this---“ she slipped her hand around his neck in a sensual glide “--- this tension between us that we can’t ignore is a big part of the problem?  You need to believe me when I say I just can’t risk staying here with you.”
His arms around her twitched, muscles convulsively tensing to hold her closer, safer.  As much as he wanted to reassure her, he couldn’t.  He knew himself too well.

Listen to the action words that once again convey sensual tension, inched, sliding, see, slipped, glide, tension, ignore, believe, risk, staying, twitched, tensing, hold, wanted, knew.  Her word choices impress upon the reader the sexual awareness between her characters in a tactile, natural tone that is entirely her own.

Catherine Mann’s ability to build strong, tender male characters is one of the elements that make her voice resonate.
But he felt each word and all her fear soak into him along with the heat of her rapid breaths.

His arms around her twitched, muscles convulsively tensing to hold her closer, safer.

The character is strong, willing to jump into the fray, and nearly vibrates with tenderness and a desire to protect.  He’s every woman’s fantasy, warrior, lover, husband, yet he still comes across as realistic.
Her choice of that kind of character is as much a part of her voice as the words she chooses to convey the emotional attachment between her characters. 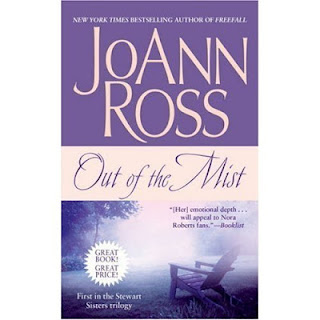 JoAnn Ross writes Contemporary Mainstream Romance and is published through Pocket.  In her book Out of the Mist, she weaves the element of theme throughout her writing and ties the entire story together with it.
Her character’s are of Scottish heritage, her setting the highlands of North Carolina, the theme interlaced throughout the story Smokey mountain-Gaelic-Medieval Scot in texture.
To demonstrate what I mean I must jump around within the text instead of choosing a single scene.

Ian had seen that look before.  It was the look of his grandfather’s Westie, right before the dog grabbed onto the postman’s trousers and refused to let go.  It was also the look Duncan got in his eyes whenever he’d parade some local girl in front of his grandson in hopes of ensuring a MacDougall heir.

JoAnn Ross’s descriptive passage sings with the flavor of bagpipes and tin flutes melding the modern and medieval cultures together.  Her use of repetition places emphasis on the words It was the look portrays as much persistent determination as a Scotsman clutching a horn of ale.
Her ability to pen similes with fresh appeal lends a melodic quality to her voice that’s all her own.

Her brain was washed as clear as the Star of Edinburgh tumblers she’d dusted today; color as rich and dazzling as Saxon Falconer’s blown glass flashed behind her closed lids.
She moaned, her hands fisting in the ebony silk of his hair, as he lifted her off the floor to deepen the kiss.  Her breasts flattened against his chest, which was as rock hard as the mountains of his homeland, their bodies so close together she couldn’t tell whether it was his heart pounding she felt, or her own.
His teeth nipped at her bottom lip, just hard enough to send desire surging through her like a bolt of lightning from a summer storm.

By tying her character’s emotions to things both concrete and elemental, she anchors their feelings and responses in reality and gives the reader a point of reference making them more visual to the audience.

He flashed a grin as wicked as a devil’s wink, as dangerous as a Highlander’s blade.

The hyperbolic phrasing of this sentence uses dramatic overstatement with playful exaggeration and gives the reader the idea that the character is as larger-than-life as he’s intended to be.
Do you recognize the theme meandering through the story?  Do you hear the poetic lyrics penned through the use of similes, repetition, hyperbole?  Her use of these devices in her descriptive passages is part of what makes her voice distinctive.
And last of all, look at all the action words that pepper each one of the lines and scenes I’ve just used as examples. Seen, look, grabbed, parade, ensuring, washed, dusted, flashed, lifted, deepen, flattened, pounding, nipped, surging.   Those words were chosen with an eye for visual or tactile appeal and an ear for the pacing of the story.
Joanne Rock, Catherine Mann, and JoAnn Ross use all the elements of writing that I’ve mentioned, not just the ones I’ve focused on in their writing.  It is their unique way of interweaving them within the structure of their stories that constitutes their voices.  Their plots are as varied as their characters and their styles. But the similarities in the components in their writing are there to discover for anyone who picks up their books and opens their pages.
Their choice of words, ensures the pacing of their stories, is always geared toward action, and tactile or visual richness.  Their use of similes or metaphors never leans toward the cliché and always offers a new and fresh visual clue to the reader.  Their characters remain constant and true to what the reader expects from them. The themes they ribbon through their story lines create symmetrical connections that complete their stories.  And their abilities to cast sensual, romantic spells that draw their readers in and capture their imaginations and emotions, through their use of description, are acknowledged by the success of the books they’ve produced. 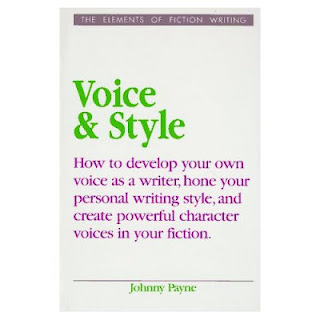 Johnny Payne, author of Voice and Style, paraphrases an idea first penned by Aristotle when he says, “The ability to imitate, marks the beginning point of art.”   As writers, we can certainly attempt to imitate these writer’s voices.  But like so many Elvis impersonators who have tried to emulate the King, we’d most likely fall short of the mark.
But by studying their voices, any writer can learn and perhaps discover the poetic music of an original written voice.
Joanne Rock, Sex and The Single Girl, Harlequin Blaze, ISBN 0-373-79108-9, 2003, released in ebook, 2010.
Catherine Mann, Strategic Engagement, Silhouette Intimate Moments, ISBN 0-373-27327-4, 2003, rereleased in ebook 2010.
JoAnn Ross, Out of the Mist, Pocket Books, ISBN 0-7394-3824-7, 2003, released in ebook 2008.
Johnny Payne, The Elements of Fiction Writing Voice and Style, Writers Digest Books, ISBN 0-89879-693-8, 1995.

Posted by Teresa Reasor at 1:48 PM

Nice article, Teresa! Thanks for posting it. :)

Very nice post, Teresa! Love the examples you chose, and how they convey the idea of "voice" so clearly!

Thanks ladies. The article is a reprint but the info never grows old.
Teresa R.

VaporFi is the best electronic cigarettes provider on the market.