BREAKING THROUGH IS RELEASED!!! And the Print copy!!

Well, it's been seven months coming but BREAKING THROUGH my new Navy SEAL romantic suspense is released.  And I'm so thrilled!!

I loved both covers so much that I'm using both. The darker one is the place marker at B and N and Amazon for the book but the redder cover is inside. And I'm using the redder one for the print edition.
The Print edition just became available this morning. They haven't melded the two pages yet, I hope that isn't confusing for customers!!

Tracy Stewart my cover artist does a wonderful job!!! 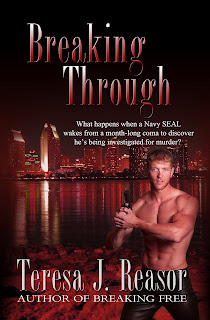 Tess works hard to live up to her father's expectations. When Brett offers her information about SEAL training in exchange for an introduction to her award-winning journalist father, she jumps at the chance. The situation Brett lobs into her father's lap is a major scoop.  But the secret she discovers about Brett is just as newsworthy. Will her feelings for this wounded warrior win out, or will she release a story guaranteed to destroy Brett’s SEAL career?

Here's an excerpt from the book:

Brett strode down the hall. With every step, he seesawed between excitement and anxiety. Reaching his destination, he paused outside the office door. Maybe they were going to allow him to return to full duty. Naw—Doc Stewart would have let him know. He was doing speech therapy one day a week, his psych therapy twice a month, and taking a language class. Goddamn. What else did they want him to do to prove his fitness for duty? How much longer was he going to have to wait?
Brett took a deep breath to offset the quick flash of anger tightening the muscles of his face. He tapped at the Captain’s door with a little more force than was necessary.
“Enter.” Jackson’s muffled tone carried through the barrier.
Brett opened the door, reached the desk in two strides, then snapped to attention. Jackson continued to look over some paperwork on a clipboard while Brett maintained his posture.
“At ease, Ensign. How do you feel about public speaking?”
Dread hit the pit of Brett’s stomach with the punch of a grenade launcher. Ah, shit. He spread his feet, folded his hands behind him, and focused his attention out the window just beyond Jackson’s shoulder. “I think it should be left to priests and politicians, sir.”
Jackson studied him, his expression impassive. “Our public information officer has developed a staph infection and has been hospitalized. He was scheduled to deliver a speech about SEAL team training to the San Diego Women’s Political League. You have been chosen to take his place this afternoon.”
Shit! “I’m not much of a public speaker, sir.”
Jackson eyed him. “It’s important for us to keep our best foot forward in the public eye, Ensign. Especially now.”
“Yes, sir.”
“I’ll be attending as well, but the bulk of the information will be coming from you.”
“Yes, sir.” Another damned test. That’s what it was. “Permission to ask a question, sir.”
Jackson’s eyes narrowed. “Permission granted.”
“How many ladies will be attending, sir?”
“About two hundred.”
Two hundred women he could humiliate himself in front of by forgetting the word he wanted, or not being able to come up with a substitute. Great, just freaking great. “Where is this meeting to be held?”
“In the Crown Room at Hotel del Coronado. You have two hours to prepare, Ensign. You’re dismissed.”
Brett focused on Jackson’s face. The son-of-a-bitch had probably waited until the last minute to call him in. “Yes, sir.” He saluted, swiveled on his heel, and left Jackson’s office. He strode down the hallway to the elevator. The doors opened and he stepped in. Blessedly alone, he painted the air blue with a stream of swear words that would have had his schoolteacher mother slapping him upside the head. Why the hell didn’t he ever forget any of them?

I'm so thrilled the book is out and hope each and every one of you enjoy it!!!
Let me know.
Here are the links so far:
Amazon

Print copy of BREAKING THROUGH

Wooohoo!
Teresa J. Reasor
Posted by Teresa Reasor at 7:55 AM

It looks great. Like your cover choice, but where are the buy links?