Jane Greenhill and I have been friends ever since we were on the Lethal Ladies Crit loop together many moons ago. And though she's in Canada and I'm in the US, we stay in touch. She writes in many genres.
No matter what she's writing, be it a YA book about aliens or a Mystery about Murder, she lends a good sense of humor to them all. There are laugh out loud moments in every story.

I thought I'd share her books with my readers. 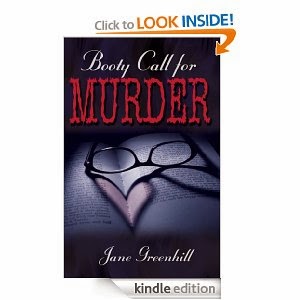 Victoria Hubert spends her days with the Dewey Decimal System and her nights living vicariously through romance novels.
When Detective Angus McDonald enters her library, she recognizes him as the coverboy of her current novel.
Angus has more skeletons in his closet than a public official. He’s on the hunt for Richard Markov, a convicted felon who slipped through the justice system.
Now Richard is back in town with a new agenda, Victoria is his next victim and as her life plays out like a romance novel, Victoria is determined to write her own happy ending.
The Cobra Murder 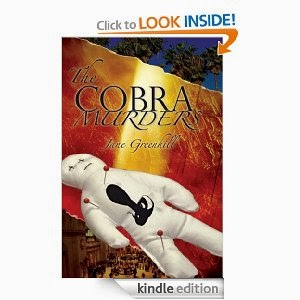 Homicide Detective Simon Keirsey spends his spare time working a personal cold case--the unsolved murder of his mother, film star Mary Margaret, thirty years earlier.
Recent killings committed by the murderer the press has dubbed The Cobra Killer unexpectedly tie to his mother's death and give Simon a renewed sense of vengeance.
Mary Margaret's mansion now houses the town's museum and employee Alice McClure is comforted by the ghost who walks the halls humming 1980's tunes.
As Simon and Alice race against time to determine who the killer is, will they be able to solve the mystery before another victim is claimed and the murderer's personal vendetta ante is upped? 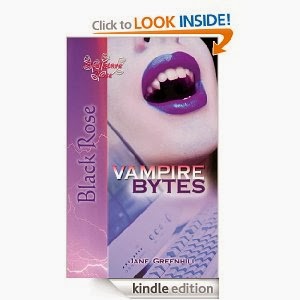 Bored with crunching numbers, Heath Clifford, accountant by day spends his nights with the on-line role playing game Vampillion. The game is controlling his life, but how does this vampire in training tell his soul mate he loves her and wants to suck her neck. (This story is funny as hell.) JMO
****
Jane's Young Adult stories are entertaining and fun. Her sense of adventure and humor shine through these.
Vortex to the Ojibwa
When the internet connection fails at their grandparent’s cottage, Theresa and her book smart brother Bobby are forced outside. Disturbing a hornet’s nest, the teens fall into a cenote and time travel to an Ojibwa encampment where Theresa finds love and Bobby aids their new friends.

When the two venture where they shouldn’t and interfere with fur trading, they put their lives in danger as well as those of the Native Americans. The teens need to use their twenty-first century smarts in order to return to safety.
I Was A Teenage Alien
Oas is sent from her home planet of Zorca-twenty-three to rescue her brother Ralb from the worst humanoid known in the solar system—a teenage girl. With her traveling companions, Rotsen, a plant with an attitude who watches too many Sopranos reruns, and Lehcarr, a Venus Fly Trap with the habit of eating her friends, they set out to find Ralb.
Traveling through a black hole, Oas is transformed from her ananoid shape into a teenage humanoid, becoming what she fears most—a teenager. They land in Bedrocktown to find the teenagers aren’t as bad as they feared—they’re worse. Zen her handler has warned her to stay away from pizza and popcorn but she tries both, with horrible results.
She needs to find her brother, figure out how humans kiss, save the town from an E.coli outbreak, and meet Johnny Depp, not necessarily in that order. Then all she has to do is find her way home, but are her ties to Earth too strong?
Star Struck Alien
Oas, a teenage alien from Zorca-twenty-three finds love and romance on Earth, but when circumstances spiral out of control ,she needs to get back to her home planet to save her true humanoid love. With a reality show heading to the cosmos, Oas, her directionally challenged brother, Ralb and Rotsen, a dandelion with a Soprano attitude need to out think, and out smart the humanoids. Who will survive?
Jolly Olde Teenage Alien 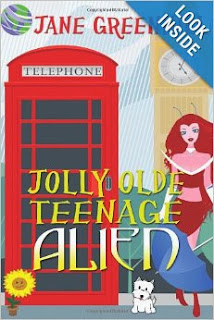 Time is running out for Oas, an interplanetary alien from her home planet of Zorca-twenty-three. Jolly Olde Teenage ALIEN The third in the Teenage ALIEN series finds Oas, Rotsen, her traveling dandelion with major attitude, and her brother Ralb in Jolly Olde England enjoying the riches that comes from having rock star friends. After two disastrous attempts to get home, Oas realizes she must take matters into her own hands if they are to survive Earth. A victim of a negative tea leaf reading, the superstitious members of Peach Acid, the rock star friends she’s traveling with, force her out onto the cold rainy streets of London, where she must fend for herself and Rotsen. Luckily, she and Rotsen are taken in by a kind play wright who isn’t quite so superstitious. But this chance meeting proves more beneficial than she could ever imagine when it leads her to an amazing revelation about her father and his past connection to Stonehenge—a connection that just might show her the way home. Oas learns it doesn't matter what planet you come from but where you end up that's important.

Her latest release will be available in a few days. It takes place in Medieval England.
Joust In Times 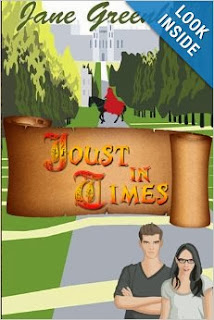 For Dorthea Rioann, life sucks big time. A summer in England riding horses sounds great, but the reality is far from ideal. Her grandfather's farm is threatened by a centuries old treaty. Her mother is oblivious to everything and everyone but her jewelry making, and is unaware her daughter is being bullied big time by Annabel, who controls the town clique. Dorthea runs away only to end up in the 'Witch's House.' A series of coincidences and she awakens in Medieval England. Dorthea brings her 21st century smarts and ingenuity to the village where she becomes a female jouster, lady-in waiting and falls in love, only to learn there really is no place like home.
Jane's bio on her author page on Amazon say's it all:
Born with a passion to read and write and heavily influenced by Nancy Drew mysteries, Jane Greenhill recalls her first writing experience on an old Underwood typewriter, plunking away at the keys while she wrote about hiding clues in oak trees. Fast forward through marriage and motherhood and Jane's now advanced to a laptop and her characters speak to her from other planets.


If you have a young adult reader in the household, introduce them to Jane's Teenage Alien books and if your a reader yourself, look up her Suspense stories. There's never a dull moment in either.
Amazon Reader Page for Jane Greenhill.

A Newsletter and A Street Team

I haven't done a Street Team or a newsletter before.  But I'd love to have more contact with my readers.
So if you're interested in either one please sign up.

I'll be running a contest to help me come up a name to call the team once we have some members.

Here's the link to reach the Street Team form:


To sign up for the  my newsletter-- I promise I'll  just be sending out important updates and sneak peaks. I won't be a pest. Here's the link:

Thank you,
Teresa Reasor
Posted by Teresa Reasor at 10:58 PM No comments: Links to this post

Next week I'll be participating in Kally Masters Military Appreciation Blog at www.KallypsoMasters.Blogspot.com