Tolquhon Castle is one of the few remaining Scottish castles that still has a standing curtain wall. 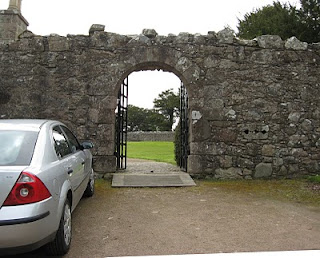 In 1200 Tolquhon Castle was a property of the crown located in the Thanage of Formartine. In 1390 Robert III granted the property to Sir Thomas Preston. 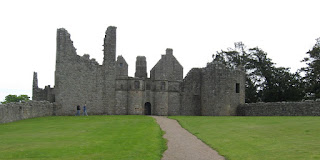 At the beginning of the 1400 Sir Thomas built the tower house with several auxiliary buildings like the great hall and the kitchen. Sir Thomas died in 1433 without leaving a male heir and the castle passed to his second daughter’s husband, John Forbes. 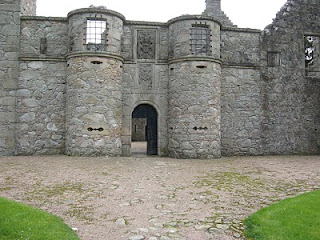 In 1544 Sir William Forbes inherited the castle and in 1584 he began expanding and improving the castle. In 1589 he built for him and his wife Elizabeth Gordon a monumental tomb in the south isle of Tarves parish kirk. In 1596 he was laid to rest there. 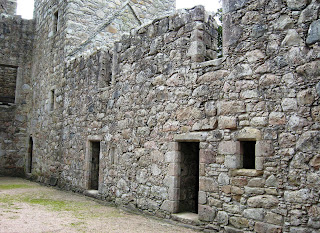 In 1651 the 10th Earl of Torquhon, Alexander, saved Charles II life during the battle of Worchester and was knighted in reward. 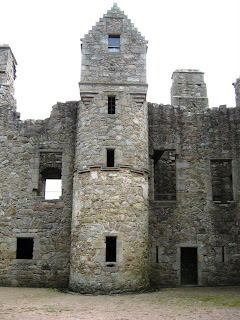 
The 11th Earl lost what was left of the family fortune by backing a failed plan to start a Scottish colony on the Darien peninsula. 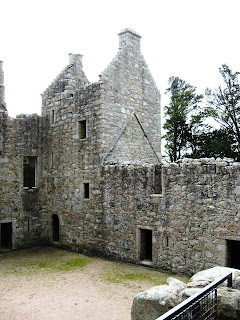 In 1716 the property was sold to the owner of Haddo House becoming an enormous land holding of that family. In 1718 William Forbes the 11th Earl of Torquhon had to be forcibly removed from Torquhon Castle. 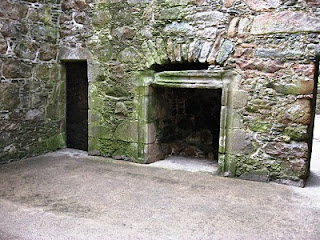 
The castle was used as a farmhouse in the 1800. In 1929 it was transferred to Historic Scotland. 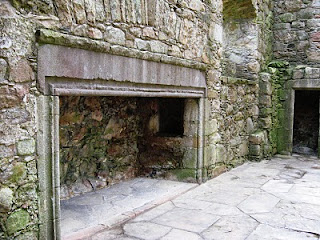 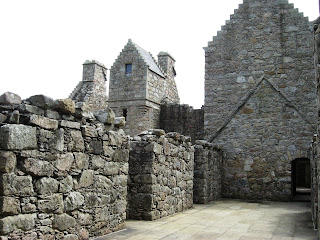 Upper part of the main house.

The day we visited Tolquhon there was a group of school children visiting the castle. A man dressed as an archer took them through the courtyard and out into the field for a demonstration of archery. You can see how the curtain wall extends from here. 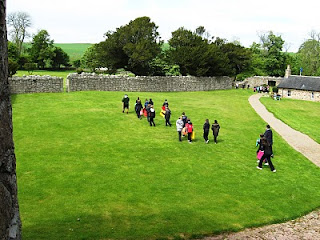 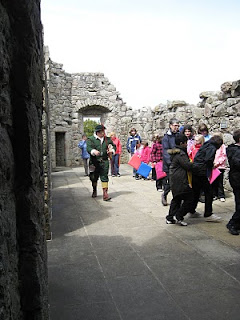 I love this next picture of the lower level hallway that extends the length of the main house. Off of this hall would be the kitchen and other rooms. Then stairways led up to the great hall and the families living quarters. 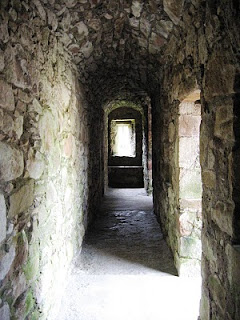 Tolquhon was a beautiful ruin. We enjoyed being there. Because the roofs weren't there to block our view, we were able to study how a castle of this type was constructed while standing at the highest levels. 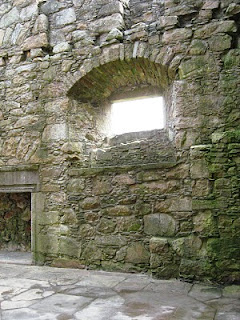 I was facinated by the stone tile in the great hall and how beautifully the windows were constructed.
I know that most people think of castles as cold and drafty and they probably were, but the Scottish aristocracy lived in their own kind of opulance.


Tomorrow I'll be talking about Haddo House.
Write on,
Teresa R.
Posted by Teresa Reasor at 1:31 AM

Teresa
While you were in Scotland at these many castles did any of them have enactors that were showing how the castle life would have been at a given period? This one looks as if you might have had interpreter dressed in the period was this an exception?

Jody:
While we were there we only saw 2 castles that had actors dressed up in period costume protraying the period. I'm trying to remember where the other castle was that they did this.

The tour for Mary Kings Close had people portraying that time period.
But as a rule no they didn't do that.

Eilean Donan there was a guy playing bagpipes dress in costume and some of the men inside the castle who were guides dressed in costume.
Teresa

Teresa, Did they give a reason why they called it a curtain wall instead of a rock wall? It is absolutely gorgeous. What fun to see how it was constructed without the roof on it. It might have been a maze.

Thank you for our next part of the journey with you. :)

Paisley:
You know, I don't know why they call it that. It was constructed around a castle as a defense. Whenever the area was attacked they'd bring people and animals inside to keep them from being attacked.

I'll have to do some research and see why it's called a curtain wall.
Teresa R.

It would be interesting to learn more about the curtain wall. I popped it up on Google and they didn't seem to come to an agreeable conclusion. I love my Scottish forebearers, but they did get poetic in what the called things at times and how they pronounced them. :)

Awesome pictures. You're so lucky to have visit Scotland. SIGH Maybe one day.

So beautiful....Looks like you have great weather for your trip. What was the temperature?

Autumn:
Never say die. You'll get there one day if you work to. It took me a while but I did it.

Normal weather there is between 50-55 degrees during May but we actually had days that it was 60 and above. The volcano erupting and sending dust into the atmosphere had done something to the climate.
We wore sweaters and sweatshirts the whole time but didn't have to have anything heavier.

And it only rained a couple of times. Which everyone told us was amazing.
Teresa R.

Beautiful castle!! I must visit this one some day.

What wonderful pictures. I love castles.

I've never been to Scotland and hope to one day to go there. Until then...I'll enjoy your photos. :)

Karen:
I'm glad you're enjoying the pictures. I just took a little point and shoot Canon. A powershot A560.

It did a wonderful job.

I've since purchased another camera another Canon that I can use my zoom lens from my old 35 milimeter. But it's more for portraits of people than anything else.

I still prefer the small one.
Teresa