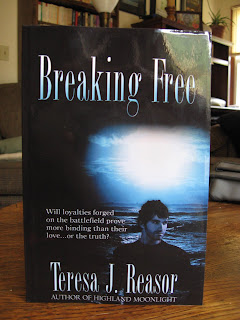 Being a writer is not always easy.  There are days I never look up from my computer. And others I wander through the house from room to room brainstorming to try and get a clearer picture of what I want to happen in my story. Some days it comes easy and others it's like pushing a jelly bean up a mountain with my nose.
But yesterday was one of the good days.  I got my galley of Breaking Free.  I haven't okayed it yet.
I have to read all the way through the book and make sure that every t is crossed and every i dotted. But there's nothing wrong with the cover.  It's a beauty. And my man is something that dreams are made of.  Just as is my hero Adam "Hawk" Yazzie.
As much as I'm enjoying my kindle, I have to tell you that holding that print book in my hand really thrilled me to no end. I believe it's because it is a concrete representation of all the work that has gone into writing a novel. Part of it is knowing that every one of my 93,000 words is in there. And those words have come from inside my head and my heart.
I hope when a reader picks it up and opens it to that sea of words he/she will know that I believed in every one of them.
Write on,
Teresa Reasor
Posted by Teresa Reasor at 9:22 PM 5 comments:

Computer Gremlins Stay Away or Adventures in Self Publishing

I have to say that writing is a great deal easier than some of the other things that go with it. If we all think the publishing world is going through a monumental change---well so are the writers. In a way there has been a creative revolution in the publishing world that has led authors to seek more control over their careers. And self-publishing plays into that.
Recently, I made the decision to self-publish a manuscript. And I have to say, aside from the excitement of putting my words out there, this has been a learning experience.  Luckily I have a wonderful network of supportive friends who understand the technology of publishing. They just hadn’t run up against the Reasor curse.
When Tracy, my cover artist and friend, got together with me to help me format my work, I warned her straight up that I had a history of technological snafus and that anything that could go wrong--would go wrong. Seven hours later, she admitted that I might have some kind of computer gremlin hanging about me ready to hit the wrong key at the wrong time and wreak havoc on the formatting of my document and even the punctuation. And we both decided that as wonderful as Macs are, Word For Macs Sucks!!!
We discovered that the publishing world didn’t like my idea of using a different font other than Times New Roman. And as soon as I switched the font, it knocked out all of my chapter and scene break alignments, and all my italicized words. One format demanded two hyphens as apposed to an m-dash.  All the formats demanded italicizing phrases instead of underlining. And none of them wanted any extra spaces.  And removing those spaces sometimes caused a shift in sentences on the page and sometimes deleted punctuation and indents.  And there could be no tabs. If I had a quarter for every time I ran spell check and grammar check, I could have retired a rich person without ever publishing anything.
Four days later I had uploaded my document 3 times and was still struggling with the indents and other issues.  BUT I HAD SOLD 12 BOOKS. The only problem was that each one of those downloads were sprinkled with weird things, like equal signs in strange places (don’t have a clue where they came from (unless I sleep walked and added them to the document.) and other issues from deleting spaces.  And I hope those brave readers will still love the story despite those few issues.
THANK GOD FOR CHILDREN. Every household now days has at least one technological whiz kid and though mine no longer live at home, they’re still just a phone call or an email away. My whiz kid happens to be finishing his doctorate in mechanical engineering at Georgia Tech. And also, when his mother calls he’s willing to jump into the mess and try and make some sense of it. Daniel immediately took the bull by the horns and looked for Mac compatible software that would convert the files into a Kindle friendly format.
He didn’t download any software but he had me save my document as an HTM document and send it to him. With that he was able to convert it for me into a mobi file that I could upload and the formatting would stay in place. And, God love him, he experimented with the original while I made one last attempt to find every weird thing that Word had done to my document. (Like flip all the quotation marks after an mdash backwards.)
I sent him the clean file, and since he’d worked things out, he was able to convert the file to mobi for me and within an hour I uploaded it.  YES!!! And if there’s anything I missed, I hope the reader will be so lost in the story, they’ll overlook it.
Next time I’ll talk about how many different ways you can screw up on your dashboard at Kindle and mess your stuff up.  Yes, I have done that too.
Teresa Reasor
Posted by Teresa Reasor at 12:48 AM No comments: