I've been writing so much I lost track of time and wondered why my husband was home yesterday until he reminded me. So I'm celebrating the week with a book cover reveal and an update on my progress on the next book, BREAKING OUT.

The book has reached the 100,000 word mark and I'm attempting to wind up the loose ends and give it that crash-bang, super stupendous ending it needs and deserves. Here's the cover incase you haven't seen it yet. 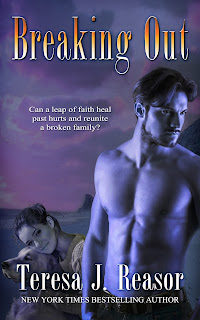 I'm not going to post a blurb because I'm in the process of rewriting it. The book took a turn that was totally different than I expected and I need to put more of the conflict into the blurb. So I'll be posting it later.

I'm revisiting Breaking Away and posting an excerpt because I reread part of the book and thought to myself, darn who wrote that. And of course it was me. LOL.

Sometimes we writers write so much that we forget how much effort and passion we've put into a project until we revisit and reread it for ourselves. When we do that,  it's all fresh and new to us just like it is to you readers because we haven't read it in a while.

Flash steps into Breaking Out to help Zach out and Kathleen and Callahan from Breaking Boundaries are back in this one, too, along with Zoe, Hawk and Bowie. And just a hint... Bowie lets slip something in this one that will clue you readers in on what he's all about.  So revisiting the guys drew me in to read a little of Flash's book because I love him so much. Then I thought. I've got to post an excerpt on my blog. So here it is. 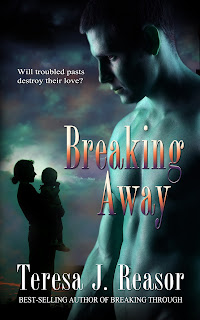 He nodded, the movement brief. “Several parts of your body can be used as a weapon.  Head, hands, elbows, knees, and feet. And several parts of your attacker’s body can be your target. Eyes, ears, mouth, nose, throat, stomach, groin, knees, ankles, and toes. The key is not to be afraid to go after them with everything you have.”
Could she do that? Go after someone with no holds barred? Her non-aggressiveness might be what allowed Will to target her in the first place.
Sam shifted her weight, and nodded. “I can learn to be aggressive. I’m not going to be a victim ever again.”
“Good.”  Tim smiled. “This won’t come easy to you. You’ll have to practice after you get the hang of it.”
He demonstrated how to use her hands like weapons, using her fingers, thumbs and palm to do damage to the face, ears, and throat. Next he showed her how to use her hand like a hammer instead of a fist.
“Once you have your opponent disabled you run like hell to safety. Don’t allow the adrenaline in your system to make you too bold. You’ll be tempted to stick around and exact some payback, but when you’re facing someone bigger than you, it’s better to live to fight another day. Just get the hell out of there.”
“Is that what you did?” she asked.
“Not always, and there were times I regretted it. Especially when I was younger and on the street.”
She caught her breath. “Tim—”
He shook his head and looked away. “A lifetime ago. I was lucky. I picked the pocket of the wrong guy, and after he shook me so hard he damn near made my teeth rattle, he and his wife took me in. I’ll tell you about it sometime. Right now we’re concentrating on you.”
But she didn’t want to concentrate on herself. She wanted to know as much about him as he’d guessed about her.
When he moved around behind her again, she remained relaxed. “I’m going to put my arm around your neck,” he warned. His chest brushed her back as he stepped close.  “See the way this muscle is divided in my forearm?” He raised his arm, his other encircling her as he pointed out the division in the well-developed muscle.  “There’s a nerve there that’s particularly open to pain. Especially if you shove your beautiful, sharp chin down into it. To be certain you inflict enough pain to get the attacker to release you, loop your hands behind your head and force your chin down into that groove.”
With his arms encircling her, Sam couldn’t break away from the sense of safety and caring surrounding her. But she wanted more. She gripped his arm with both hands and leaned back to rest her head against his shoulder.
The CD clicked off.
For a beat, then two, Tim remained still. He shifted his weight and aligned his body with hers. He lowered his arm to encircle her upper shoulders and hold her. His other went around her waist, and his hand splayed against her abdomen. He caught his breath and rested his chin against her hair, the warmth of his breath caressing her ear. She shivered.
“You’re losing focus.” His voice held a husky note it hadn’t had a moment before.
With his body pressed so firm and masculine up against her from behind, and his hand resting so familiarly on her belly, tantalizing tremors worked their way through her lower limbs. A wonderful, empty ache settled between her legs. She fought against the urge to push her hips back against him.
Swallowing to relieve the sudden dryness of her throat, she said. “I think I need some time to digest everything you’ve shown me so far.” She turned to look up at him. Her gaze snagged at the masculine angle of his beard-darkened jaw, then his lips, no longer tightened in concentration but parted. When her gaze finally rose to meet his, his hand curved around her hip, his thumb resting along her pelvic bone, sending jets of sensation downward to tempt her.
A flush rode the crest of his cheekbones. His eyes darkened, his pupils expanded, leaving a rim of cerulean blue electric with emotion. The hot, slumberous desire she read on his face stole her breath. Her body clamored for her to turn against him, guide him between her legs and let nature take its course.
But those fierce moments of anxiety she’d experienced earlier lay too fresh in her mind. When they made love she didn’t want fear to have a part in it. “How about some ice cream?” she managed, her voice dwindling to a whisper.
Tim’s throat worked as he swallowed. He drew a deep breath. The tension in his body relaxed by degrees, and a wry smile tilted his lips. “Sure. I could use something to cool me down.”
In case you haven't read the book and are interested I'm posting the blurb and the links where you can purchase it.

When lone wolf, Navy SEAL Harold “Flash” Carney agrees to act as an undercover operative for the FBI in an international smuggling sting, he revisits a past he hoped to leave behind forever. During the sting his handler is killed. Neck deep in a double cross and cut off from his team, Flash goes on the run with only his training to keep him alive.

Samantha Cross is desperate to leave her past as a battered wife behind, but her ex-husband is attempting to gain custody of their daughter, Joy, to keep them in his life. When her ex turns stalker, Sam is determined to do whatever it takes to protect her daughter and break his hold over them for good.

Despite their mutual wariness, Samantha and Flash are drawn to each other. But trust comes hard. When the walls both have erected start to crumble, trouble surfaces from all fronts, and Flash has no choice but to break away from the ingrained habits of a lifetime to save the one thing he’s always wanted and thought he’d never have—a family.

I'll keep you posted on the moment I type the end to BREAKING OUT. I can't wait to do it myself. I'll be putting it up for preorder as soon as I send it to my editor. So be on the lookout if you're interested. And I'll be posting some excerpts soon!