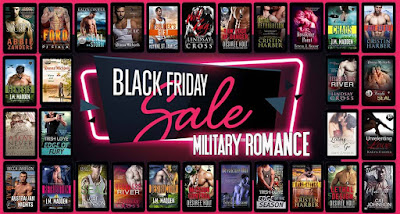 I'm announcing a Military Romance Sale that will run from Black Friday November 29 through Cyber Monday through December 3.   Over 30 titles either FREE or at least 50% discounted.
You'll have 5 whole days to decide which ones you want to take advantage of!!! Hopefully all of them.