Showing posts from March, 2015
Show all

7 Things About My Writing and a Kick Ass Contest

March 22, 2015
Kallypso Masters challenged me on Facebook recently to write seven things about my writing.  After writing the post for Facebook, I thought I'd post it here on my blog and also some news about a contest I'm participating in that will be running for the next month.          1.  I am a plotter and a pantser rolled into one. I’ll have the general idea of what my book is going to be about. Have all the physical traits of my characters, emotional baggage, and conflicts all plotted out on a character chart so I can keep all of it straight. And I have a story board I put all the plot points of first kiss, first love scene, black moment and etc.   down on.   But anything that happens in between is fair game and gets written down as it happens.         2.   I story board my books so I can keep track of Character Point of View and because I’m an artist and a writer I need that visual aid. It helps me see in color—because each of the characters have their own color,
Post a Comment
Read more

Two Kick Ass Anthologies and Both $.99. 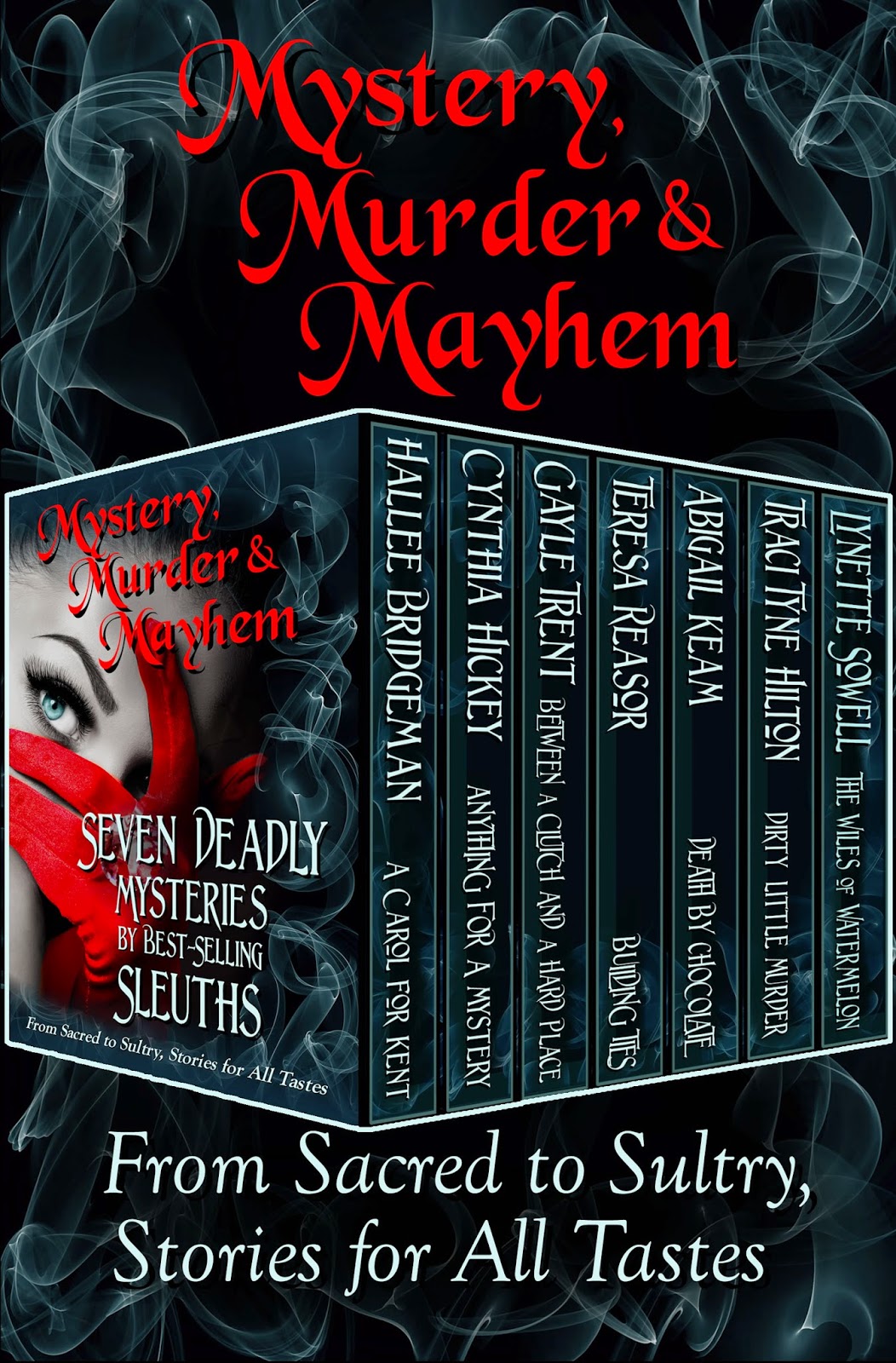 RELEASED MARCH 3, 2015. MYSTERY, MURDER, AND MAYHEM ! Stories from six very talented authors:  Hallee Bridgeman, Cynthia Hickey, Gayle Trent, Abigail Keam, Tracy Tyne Hilton, and Lynette Sowell. Here are the condensed blurbs : A Carol for Kent  by Hallee Bridgeman: A ruthless serial killer seeks to end a love song eight years in the making! Anything for a Mystery  by Cynthia Hickey: For a best-selling romance author, switching genres could be a life and death decision! Between a Clutch and a Hard Place  by Gayle Trent: A cryptic note in a consignment store purse, sends Myrtle Crumb searching for answers.  Will she find more trouble than she bargained for? Building Ties  by New York Times Best Selling Author Teresa J. Reasor: Home from a tour in Nicaragua, a Navy Seal learns his fiance was injured in a car bomb and is being stalked by a killer! Death By Chocolate  by Abigail Keam: A threatening chase, blackmail, and a friend's missing son prove to be all Jos
Post a Comment
Read more

What's UP In March ?

I'm so glad to have some news to share with you dear readers. I now have an Facebook author page   Author Teresa Reasor I'd love it if you would like my page. It will allow you to keep up with day to day things happening with my writing. Also I still have my regular Facebook profile page at Teresa Reasor and if you'd like to friend me I'd love it. I post a lot of interesting articles I run across there and just hang out. Whenever I'm involved in release parties or other things I usually use my address book from my private facebook page so you'd get info about contests and other activities there as well as the author page. Please share this info with fellow readers if you think they'd be interested in it. March 3rd my book Building Ties will be released in an anthology titled Mystery, Murder, & Mayhem  It's been a pleasure to work with six very talented authors to make this happen.  Hallee Bridgeman, Cynthia Hickey, Gayle Trent, Abigail
1 comment
Read more
More posts