IT'S RELEASE DAY FOR BUILDING STRENGTH (Book 9 of the SEAL Team Heartbreakers)!!!!!

I'm so excited. And I can't wait to hear back from my readers!!

In Building  Strength, I'm reintroducing the new SEAL team Brett Weaver was transferred into in Building Ties. And though Brett has moved on to command his own team,  Lt. Commander Adam 'Hawk' Yazzie is the commanding officer for this team's platoon. You'll see him in several scenes in all his "happily married hunkiness" as my editor commented.

The Building part of the SEAL Team Heartbreakers will concentrate on the romances, trials, and challenges of this new team and the covers for each book will have similar elements much like the original SEAL team books were similar.  And just a note for all of you. My cover artist Tracy Stewart has spent a great deal of time revamping the original covers for the original books and giving them all a facelift. I'll be uploading them ASAP. 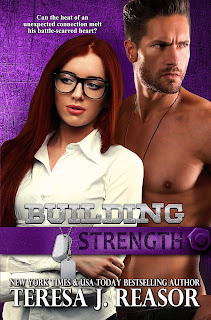 Sleeping with a man before getting to know him isn’t the smartest blueprint for building a relationship.
But after being celibate for so long, when lightning strikes redhead Moira McKee embraces being impetuous for once in her life and decides to go with it. Even if Navy SEAL Lieutenant Sam Harding never calls her again, he will at least have replaced the painful memories of her first (and last) intimate experience.
Sam Harding has a reputation for being a hard-ass at work and at play. He has two unbendable rules: No strings. Keep it casual. But when he meets Moira at a charity dinner, he’s torn between the desire to take her to bed and the need to protect her.
After a night of terrific sex, neither knows where things are going. But then Moira finds a dead body on the grounds of the hotel, and Sam can’t walk away before he’s sure she’s safe.
At least that’s what he tells himself. But as the threat he’s sensed becomes real, he’s powerless to protect her. It’s up to Moira to fight for her survival…and his.

HERE'S AN EXCERPT to whet your appetite for the book. I hope you like it


He wasn’t pushing. Wasn’t handling her. But the way he left his arm around her waist, the way he tucked her hair behind her ear, the way he kissed her, jump-started something inside her no one else had even touched. Every nerve was poised for the feel of his hands on her skin, for the weight of his body atop her own.
She wanted him. Had felt that jolt of attraction the moment she first saw him, but had dismissed it because before…he would never have looked at her.
He sure was looking at her now, though. And she wanted him to keep looking…and more.
But was she ready to be so reckless? Though her entire body was ready, her mind remained cautious. “I’ll look forward to the sailing trip on Sunday.”
“Wear something comfortable and bring sunblock, and maybe wear a baseball cap or sunglasses.”
“Will do. Should I fix some lunch for us?”
He shook his head. “I’ll take care of it. I know a place that does an excellent job. I have plenty of drinks on board, but I don’t keep food because I don’t know from week to week if I’ll be there.” He brushed her cheek with his lips, and when she looked up, planted a firmer kiss on her mouth.
He accompanied her to the foot of the stairs. “I’ll call you tomorrow with an ETA.”
She smiled at the acronym. “All right. Thanks for the dance lesson.”
He grinned. “My pleasure.” She watched his confident stride toward the entrance, and smiled as he turned and gave her one last wave.
She already regretted letting him go while she climbed the lobby steps to catch an elevator. But she’d done the right thing. She needed time to build her confidence before she took the plunge into a physical relationship with anyone.
She stepped onto the elevator with a couple, both blond, young, and unable to keep their hands off each other, though they were subtle about it. The woman clung to the man like a honeysuckle vine and ran her fingers up and down his shirt buttons.
The elevator door opened, and all three of them walked down the hallway in the same direction, and the two were already in a clinch before they got the door open. They stumbled inside and the door shut with a bang.
Was that how she and Sam would have been if she’d invited him upstairs?
To be with someone so strong and sure of himself, she’d have to project the same.
Even as she thought it, she reminded herself that she couldn’t pretend to be something she wasn’t. Otherwise the whole relationship would be based on a lie. She was just who she was. A slightly scarred woman trying to find her way to a new normal. If he couldn’t like her for who she was… She’d regret it.
She let herself into the room, pulled out her keycard and phone, and placed them on the dresser. Shaking free of her windbreaker, she took in every detail of the room, from the pale gray hue on the walls to the darker gray curtains and comforter on the bed. Numerous pillows on the bed reflected both hues in their design.
She should have asked Sam to stay. She pulled off her ponytail holder and ran her fingers through the wind-tossed mop.
Her cell phone rang. She crossed to answer it.
Sam’s deep voice came across the line. “Just wanted to be sure you made it to your room okay.”
“Yes, I’m fine.” She hesitated. “The room is nice. Secure. And I have a balcony. Have you ever stayed here?”
“No. I’ve only been there for hospital functions and a wedding or two.”
She was trembling and her tongue suddenly felt clumsy as she said. “Would you like to?”
Silence stretched. “Someday or tonight?”
She’d just lost her mind. But their time together had been perfect. “Tonight.” She was gripping the phone so hard her fingers ached.
“What’s your room number?”
She could barely get it out.
“I’ll be there in fifteen minutes.”
She couldn’t tell if she was going to die of embarrassment or anticipation. What would he think of her?
And she hadn’t brought any sexy underwear or even a nice gown. He probably wouldn’t even care about that. He wasn’t coming back to sleep. The thought sent a rush of heat to her face that seemed to sweep over the rest of her. She was either making a horrible mistake or an impulsive, perfect decision. She’d find out which once he got here.
Her body was already warming, and the persistent, empty ache between her thighs was driving her crazy. Her breathing grew uneven and labored. She rubbed her hands over her arms and paced the floor.
At his soft knock her heart actually leapt, and she moved to open the door.
His eyes looked dark and his cheeks were flushed. Her own cheeks went hot.
She stepped back to allow him to enter the room, shut the door, and leaned back against it so her shaky legs wouldn’t give out on her. Her throat went dry. She bit her lip. “I’ve never done anything like this before.”
“I know. It’s driving me crazy.” He cradled her face in his hands and bent his head to kiss her with a care and gentleness that made the throb of need intensify.
When he raised his head, she was slow to open her eyes. “I don’t have any condoms.”
“I got it covered.” He pulled his wallet out of his back pocket, opened it, and extracted two condoms. “Emergency stash. I’ve been carrying them around for over a year. Let’s hope they’re still good.”
A laugh burst out, surprising her.
His grin pushed her need up a notch.
“Sam.” Was that her voice with the plea in it?

I LOVE TO LEAVE YOU HANGING.
Be on the lookout for Building Strength!!!!

And another thing to celebrate! I have a book up for preorder in the SEALS IN PARADISE series. 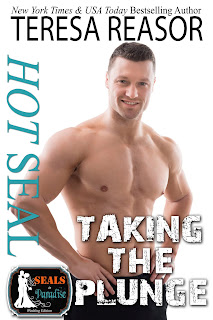 Hot SEAL, Taking The Plunge will be released September 1, 2020.  But you can preorder it right now if you want it.

Be on the lookout for some promotional things we'll be doing after March 29th to introduce the series.
You can join the SEALs In Paradise facebook page for updates about that.
https://www.facebook.com/groups/sealsinparadise/

I ALSO HAVE A CONTEST GOING ON!!! 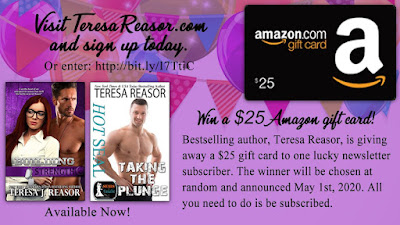 If you sign up for my newsletter, you'll automatically be entered in a $25.00 gift card giveaway.  Announced May 1st.  And since you're reading this in my blog you won't have to go to the website to sign up. You can do it right from here. NEWSLETTER

I'm so fortunate to be able to do what I love. I am truly blessed. And it's so wonderful to be able to share it with all of you.
Have a Happy St. Patricks Day.

Posted by Teresa Reasor at 11:07 PM No comments: