What can I say about Haddo House. OMG!!! Anyone who travels to Scotland, and who stays in the Aberdeen shire area, should by all means see Haddo House. 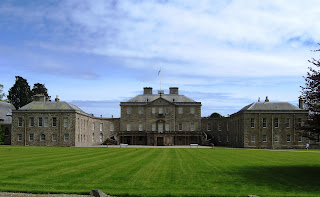 Why? Because it is magnificent, outside and in. The house was built between 1731 and 1736. It’s still a working estate. And open to the public. 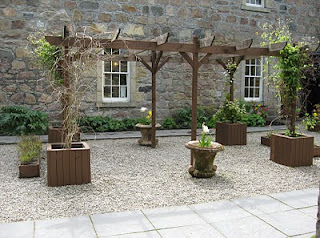 (The Haddow Stables and Carriage House has been converted into a tea room and visitors center.) 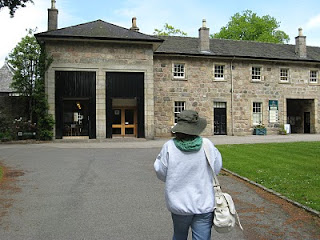 The main hall has a stunning fireplace and warm wood paneling.

The anteroom off of the hall has a beautiful ceiling.

Queen Victoria spent the night there and they have a bedroom named her honor with a huge canopied bed.

In the Giles room is a stunning collection of paintings done by James Giles of 85 of the castles in Scotland.

The library is wall to wall books, just as a library should be, and the curved quadrant leading to the library also has curved book cases filled with books and topped with marble busts.

The Morning Room would be my favorite room in the house. Intimate, beautiful, with chairs pulled around the fireplace and bookcases built into the wall on either side.

The room called the Square has the robes worn by the Marquees and Marchioness to the coronation of Queen Victoria.

Haddo House is a house, not a Castle. And you can tell it was a much loved home. 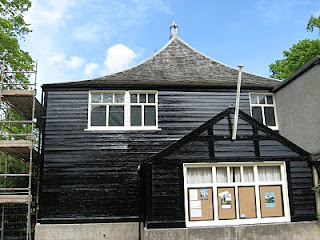 (Haddo Hall used as a theatre used by the Haddo Arts Trust and the Haddo Choral Society. It was being changed from blue to black while we were there.) 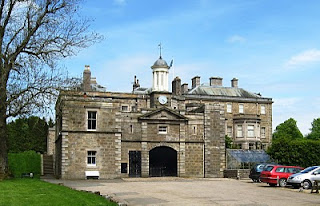 ( The Southwest side of the Haddo House)
James Haddo was a descendent of the Gordons, the Marquess and Earls of Huntly who can trace their ancestory back to the 1100. In 1469 he acquired the Haddo estate. After building a tower house in the area James and his descendants began to acquire other estates all across Aberdeen shire. One of them being Torquhon Castle that I talked about yesterday. 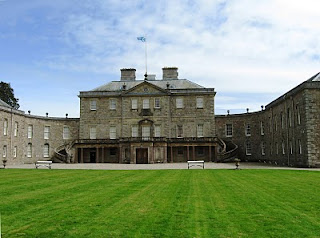 ( The Northwest side of Haddo House)
In 1640 George Gordon inherited the estate from his brother. Later he was appointed High Chancellor of Scotland and made the first Earl of Aberdeen. Upon his death at age 83, his son William became the second Earl and commissioned William Adams to build Haddo House in 1731. 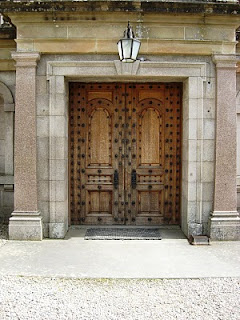 In 1745, William died suddenly, bad for him, but fortunate for his children because he was a supporter of Bonnie Prince Charlie and had he lived this estate and everything else the Gordons owned would have been confiscated. 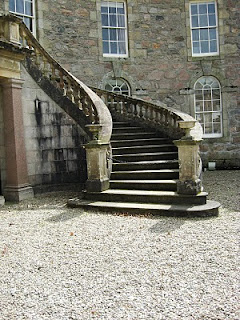 (The West Side Staircase)
William’s grandson, George Hamilton Gordon the IV Earl inherited the house in 1801 and he is responsible for expanding the house and planting the trees on the grounds that make up the extensive gardens now. He had an extensive political career becoming Prime Minister in 1822-25. It was he who talked Queen Victoria into buying Balmoral Castle. 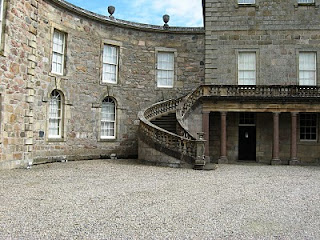 His son inherited but died after just a few years leaving it to his son another George the VI Earl. The young man packed up and left Scotland to become lumberjack in Canada and mariner. He was killed in an accident at age 30 off the coast of Australia. 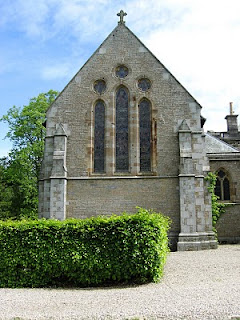 (The chapel on the West corner of Haddo house)

In 1870, George Hamilton Gordon, the VII Earl, inherited the estate which had continued to grow despite George VI’s absence. He went on to be Governor General of Canada and Viceroy of Ireland. He was also made the Ist Marquees of Aberdeen and Temair. He and his wife built the Chapel on the west corner of the house in 1916. 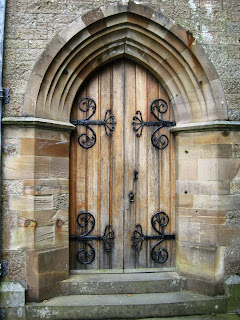 After the IV Marquess, David Gordon, died in 1974 leaving the house to Historic Scotland and opened to the public in 1979. 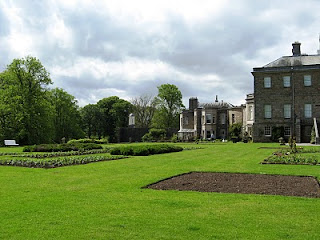 While we were there we ran into the gardeners working to refurbish the flower beds in the manner that they were designed during the Victorian Era. We watched them for a time at work. It was they who told us that Haddo House had been used as a home for pregnant women during the Ist World War. 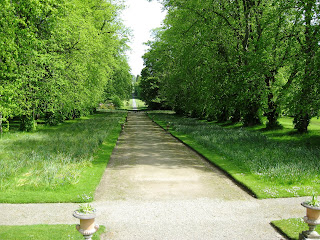 The place is truly impressive and a must see by anyone traveling in the area.

Tomorrow I'll be blogging about a place haunted by loss for which the Scottish people still grieve.
Write on,

Wow you visited so many awesome places! Nice pics!!

What a magnificent house and how wonderful that you were able to go inside and explore. Truly beautiful and what an exciting history you learned.

Thanks again for taking us along with you. Geez, now I really hope to sell a book so I can start saving for another Scottish trek.

We were so fortunate that we got to spend 2 whole weeks going from place to place.

Mitsi my traveling companion and I poured over a site called undiscovered scotland and plotted each place we wanted to see. And thank God for GPS. I'd put it into the GPS each morning so we didn't waste time getting lost and off we'd go.
The only two places we truly wanted to see and didn't get to was Kilchurn Castle for me and Culzean Castle for her. We just ran out of time. Darnit. Maybe next time we'll be able to hit those two places.

Thank you again for the lovely pictures and blog. They are magnificent.