My 2nd favorite castle in all of Scotland, of the ones we got to see, was Cawdor Castle. I’m Campbell crazy. Anyone who has read my first book Highland Moonlight probably deduced that. But who wouldn’t be blown away by Cawdor Castle, Campbell obsessed or not? It’s very existence came about because of a dream. 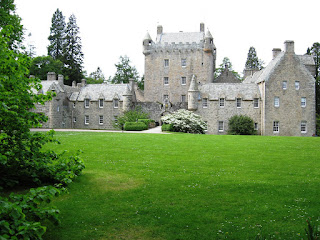 The first Thane of Cawdor (Calder) was created in 1180 by William I. A Thane was the equivalent of a Baron and a traditional Scottish title. Thane Cawdor was appointed sheriff of the royal castle at Nairn. Soon after the original Cawdor castle was built on a marshy piece of ground about a mile from the current Cawdor castle. There is nothing left of it. 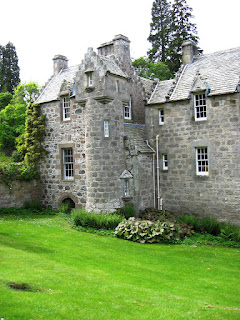 In 1310 the second Thane, William Cawdor, had his title confirmed by Robert the Bruce.

In 1370 the third Thane Cawdor, William, began a search for a location for a new castle. He had a dream that led him to load gold on the back of a donkey and follow it as it roamed the area. The donkey finally stopped and lay beneath a tree and went to sleep. That became the site of the current castle. But the most unusual aspect of the story is, the castle was built around the tree where the donkey slept. It protrudes from the floor of the cellar today though it died in 1372 from lack of sunlight. It is said to possess magic qualities that have protected the castle since its construction. 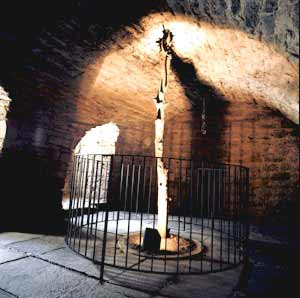 (I had to borrow this picture because we weren’t allowed to take pictures inside the castle. The tree in the legend says it was a Hawthorne tree but scientists have studied it and discovered it was a holly tree. Which doesn't matter, they were both considered powerful magic by the Druids.)

By the time the 7th Thane of Cawdor , another William, married Margaret Sutherland, of Dunbeath Castle, the family was very wealthy and influential. John, the 8th Thane of Cawdor died in 1498 and soon after, his daughter Muriel was born and became heir to all the power and wealth of Cawdor Castle.

Now, I never said the Campbells were always good guys. All through Scottish history they have been known for being ruthless warriors and politicians. I have even heard them referred to as Robert the Bruce’s SS soldiers.

Thus, it wasn’t surprising to learn that Archibald Campbell, the 2nd Earl of Argyll, ordered Muriel to be kidnapped and held at Inveraray Castle. She was held there for 10 years where at the age of 12 she was married to Archie’s youngest son, Sir John Campbell in 1510. With a beginning like that, you wouldn’t think the marriage would be either happy or productive, but in fact it was. Talk about fodder for a romance novel. 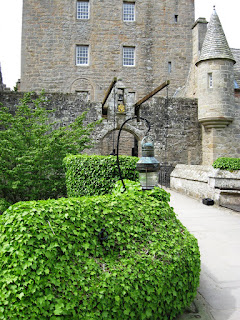 In 1520  John’s sister, Catherine, was married to a man named Lachlan Cattanach Maclean of Duart Castle. In 1522, blaming her for the lack of children in their marriage, Maclean rowed her out into the bay at Mull to Lady’s Rock and marooned her there to die. Lucky for Catherine, passing fishermen saw her and came to her rescue. She made her way back to Inveraray Castle. Lachlan rose the next day and seeing the rock empty, assumed she had drowned. He sent a message to her brother Archibald, the 4th Earl, that his sister had drowned and he would be bringing the body to Inveraray for burial.  Of course he didn't even go out to see if there was a body to recover. 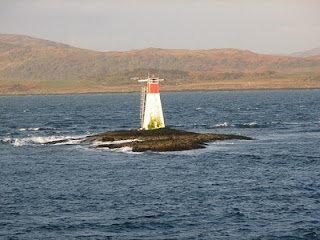 (This is a borrowed image of Lady's Rock just off the coast of Mull. It can be seen from Duart Castle when it is low tide.  At high tide the whole thing is covered thus the bouy that is set upon it to keep ships from hitting it and running aground.)
Lachlan showed up at the castle with a casket and was shown into the dining room for a meal where Catherine sat waiting. Nothing was said and Lachlan was allowed to escape without punishment, perhaps to allow him time to stew and become afraid, very afraid. In November of 1523, during a visit to Edinburgh, he was stabbed to death in bed.

John Campbell was suspected of the murder and he and his wife Muriel moved to Cawdor Castle, out of sight of those interested in the crime. Immediately, Muriel’s four uncles decided that no Campbell was going to take over and they laid siege to the castle. Two of them were killed and the other’s withdrew and the Campbell Clan settled in. 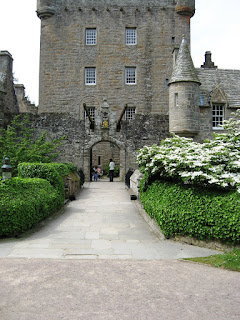 Cawdor Castle became a satellite property of the Campbell Clan as the real traditional homesite was the Argyll area, where my book Highland Moonlight is set.

John Campbell, the 7th Thane of Cawdor, acted as tutor and guardian of the 7th Earl of Argyll, Archibald.  John was assassinated in a plot to overturn the power structure within the clan. The situation was settled by a series of marriages that followed the incident. 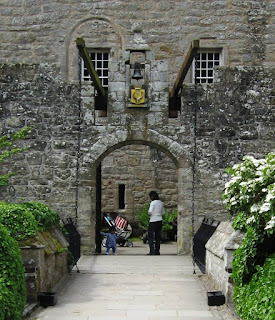 (Cawdor Castle was the only castle in Scotland that I ever saw a real draw bridge built before.)

In 1612, the 12th Thane of Cawdor, John, purchase the Isle of Islay from the MacDonalds. It took troops and one of King James IV’s war ships for him to take possession of it. It proved a drain on the family finances until between 1680 and 1700 a cattle breeding program was put in place on the island by  Hugh Campbell, the 14th Thane of Cawdor, It was fortunately a success, since Hugh had nine children and had to expand the castle to accommodate them all.

(This is a borrowed picture of some of the scenery of the Isle of Islay.  If I had the money to purchase an island, this would be it. It's absolutely beautiful.  It lies on the coast of the Argyll area of Scotland behind Jura Island. It is the 6th largest island off the coast of the United Kingdom.  Not too shabby eh?) 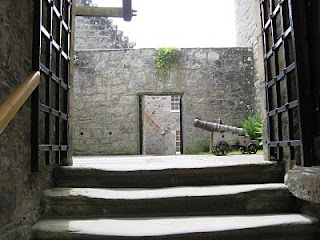 Hugh died in 1716 and his heirs became absentee owners. The 15th Thane, Alexander Campbell married a Welsh heiress. His son John, the 16th Thane was Lord of the Admiralty and Treasury. He sold the Cawdor estate and the Argyll holdings and moved to Wales. 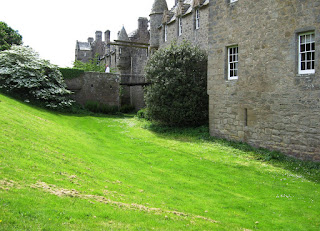 The 18th Thane of Cowder, John (Jack)Campbell, became the first Baron of Cawder. In 1827, King George IV, promoted his son, the 2nd Baron of Cawdor, to the Ist Earl of Cawdor. 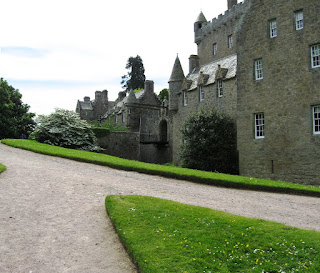 The castle under Jack and his son went through a series of repairs and is today as it was then. The Campbell family members that followed into the 20th Century went on to produce military men who distinguished themselves in battle earning, between the 12 of them, a total of 6 Military Crosses, 15 Distinguished Service Medals and 3 Victoria Crosses. 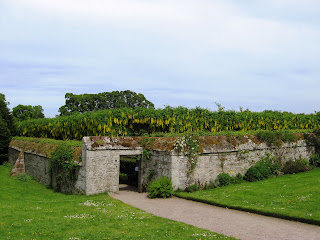 Today, the Baroness of Cawdor, stepmother to the 7th Earl and 25th Thane of Cawdor,Colin Campbell, still lives in the castle in the winter when it is closed to the public.

With all that facinating history who wouldn't be wild about the Campbells and want to write about them!!!

The castle grounds have extensive gardens that the public can wander.  It is truly beautiful. 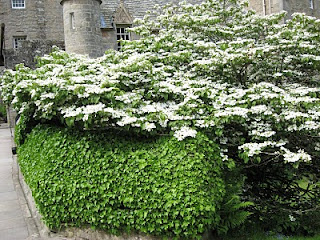 They have a maze garden that's facinating.  And I haven't even touched on the interior of the castle.  They did something that was very smart, they laid tartan runners all through the castle to protect the antique rugs and floors where tourist traffic was the heaviest.

The dining room had beautiful tapestries hung on the walls as did several of the other rooms--the Tapestry Bedroom in particular.  It had a beautiful four poster bed with a heavy canope that was gorgeous.

The Woodcock Bedroom had a beautiful bed layered with draperies.

My two favorite rooms were the Tower Room and the Yellow Room.  They were cozy and welcoming and it felt like you could truly settle in with a book and a snack. They had thickly stuffed chairs and the furniture was arranged so you could enjoy the warmth of the fireplaces.

They had a collection of Victorian bicycles in one room that I was facinated by.

It was truly one of the loveliest places  to which we traveled. 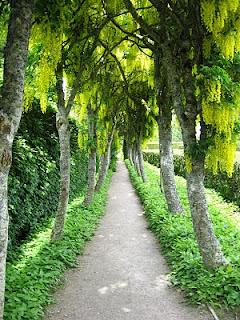 Tomorrow I'm going to take you to Fyve Castle.   Write on,  Teresa R.
Posted by Teresa Reasor at 11:49 PM

Wonderful, Teresa. I sent you three photos of the garden that I thought you'd enjoy. It truly was a great place to visit. I knew of the legend, but had no idea it was connected to this castle. How cool is that! Now it just means a lot more to me. Thanks for sharing again.

Good grief! Now that's a castle! It's gorgeous. Although I love the ones in ruins too. They're all spectacular.

I am enjoying your tour of Scotland. It brings back so many memories. I remember something about the Campbell's almost selling the island because of taxes. Your pictures are absolutely gorgeous. Your blog and pictures would make a good coffee table book titled the Castles of Scotland. When will you be coming back to the US?

Paisley:
You're welcome and thank you for sharing your garden pictures!!! I loved them.
Teresa

Wow, imagine living there. Not too shabby!
If only we were rich, those castle's are beautiful.
Great pics and information!

Anita:
Thanks for reading the blog. And yes, it's one of my favorites.
Teresa

Ruby:
I'm already back. I couldn't blog from there. Too much to see and do, so I waited until I got home to do it.
I'm so glad you're enjoying the pictures and blog.
Teresa

Mary:
Yes, could you imagine. I want an island, just a castle won't do. I figure if you're going to dream, you might as well dream big and shoot for it all.
Teresa