Salt of the Earth by Jesse V. Coffey

I recently read a story Titled Salt of the Earth by Jesse V. Coffey. It was a novella of about 31,000 words. It was different from the romance and romantic suspense stories that I usually read. But I was drawn right into this story of quirky unusual characters all living in a cemetery.  The main character Rip learns that though he can't correct the mistakes he made while alive, he can become a better person even in death. I loved the story. Loved the dialect with which the characters spoke. I could practically hear the accents.  I enjoyed the story so much I just had to share the information about it with you. 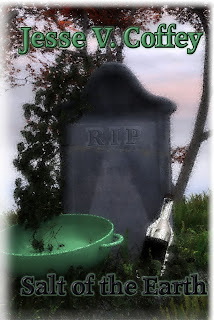 SALT OF THE EARTH

Nothing like being the "new kid on the slab," as Rip Porter quickly finds out when a robbery goes wrong. Thanks to four shots from a policeman's gun, he wakes up in the The Final Glory Cemetery, home to an assortment of ghosts, ghouls, and poltergeists. No sooner is Rip interred than he finds his final resting place isn't as restful as the brochures would lead him to believe, thanks to his rather different neighbors.
Meet Nattie Birnbaum, Rip's erstwhile Guardian; Gracie, the Welcome Committee of one; Chester, the checkers champ and resident in charge of the comings and goings of the residents. It's a cozy neighborhood and Rip is going to find out how he can fit in. Welcome, Rip Porter, to the first day of the rest of your death.

Jesse V Coffey was born in Kentucky, raised in Florida, and spent half her life in Ohio. Half southern rebel, half yankee sass, she's managed to straddle both sides of the Mason-Dixon line and happily claims both as part of her wild existence. Having a varied employment history--working as everything from fast food cashier to telephone psychic, Ms. Coffey has managed to parlay her life experiences (along with what some would call a too vivid and active imagination) into her novels.

"I never just answer a question, I have to tell a story." And with critics and readers alike, she does it well.

Stephan Cameron is impetuous and lusty; William Cameron is measured and romantic. Only one thing can divide the brothers--an attraction to the Lady Jessica Chynoweth, a flirty redhead who seems to have eyes for both of them--and the baron besides. Only one thing can bring them together again--bringing the murderer of their father to justice.

If it doesn't kill them first, they will!


After I read SALT OF THE EARTH  by Jesse V. Coffey. I discovered other stories by her written under a pen name. I thought I'd  mention those as well since they seem stories I'd enjoy reading as well.

So many books, so little time.

It was in the year 1760, when it all began with an innocent game of dice. And before the night was over, four people were dead and a man was driven insane by greed.

And in the present day, four friends will learn the secrets and face the demons of that night. And one of them will learn the most important lesson of all. When you dice with the devil, every toss is A Wager of Blood.

One of them is dying, and wants to say goodbye first. A man returns from a long absence and his explanation is not what the lady expects to hear. The President gets a phone call that comes from a very unlikely source. A man is given the ultimatum to get rid of the urns or lose his wife. A young would-be thief finds himself dead and in the most unlikely place he ever imagined--the neighborhood of the local cemetery, complete with some very interesting characters.