Releasing Two Books in one Month is Tough

I love writing. It's been my life-long dream to be able to write for a living since middle school. And I love to write different genres. So far this year I've released a historical romance, To Capture A Highlander's Heart: The Wedding Night, a military romantic suspense, Breaking Out (Book 6 of my SEAL Team Heartbreaker Series) and now a paranormal romantic comedy Kindle World novella, Magic and Mayhem: Have Wand, Will Travel.

I've written 235,627 printed words this year and am working on two more books. I'm about 8,000 words into Breaking Point, the eighth installment for my SEAL Team Heartbreakers Series. I don't know if the book will be a novella or a full length novel yet. Probably somewhere in between. A short novel of 45,000 words I think. And I've written the opening scene (about 1000 words) of my next paranormal the second installment for my Superstition Series Deep Within The Stone.

My family says that I'm obsessed and I am. I write every day. Even if I'm traveling, sick, or crazy busy. Even if it's just 200 words.(Though I try to write 1000 words a day.)  I love the brainstorming, storyboarding, and character development of the whole process. And I love to have readers read what I've written.

I've been either writing or editing the last two projects Breaking Out and Have Wand, Will Travel for the last six weeks. And setting up promotional things to get the word out there so I haven't done as much writing as I'd like in the last three or so weeks.

But I'm throwing all these out there just in case you're like me and read EVERYTHING. 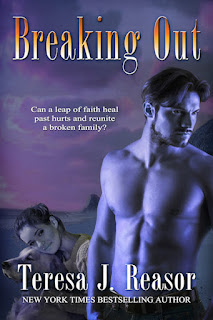 Navy SEAL Zach O’Connor was dumped while he was deployed on a high-risk mission, and the fallout from the breakup nearly cost him his career. Never again will Zach allow his feelings to make him lose sight of what really matters. Not even when his attraction to Piper Bertinelli makes him long for the very thing he’s vowed to avoid.

When an overzealous policeman from Piper’s past comes after her, Zach has to make a decision: walk away from the woman who's cracked the shell he built around his heart, or stick by her and possibly risk his career.
And there are other hurdles to face: the family who drove Piper away, but whose secrets may hold the key to understanding why her father was killed. And someone who’s a greater danger to Piper’s life than an angry cop. The man responsible for it all.

And my Kindle World Novella  Magic and Mayhem: Have Wand, Will Travel   I'm writing in my own imaginary town Superstition Kentucky first and then I travel to AssJacket, West Virginia to Robyn Peterman's town and borrow a few of her wonderful characters for the climax of my story. I had a blast writing this. And I hope to write a few more. Loved my characters and they're just waiting for another story. 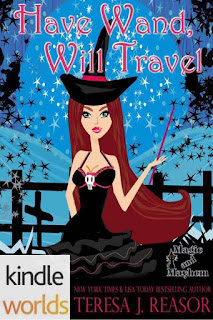 A soul-sucking wand, a witch, a vampire and a hellhound. ‘Nuff said.

Private detective and gifted witch Zaira O’Shea has built her reputation on her ability to always find her relic, magical device, or man. When the Witches’ Council hires her to find and return a stolen wand, she can’t refuse, and she’s eager to recover the device. Until the clues lead her to a vampire with fallen-angel good looks, and talents that don’t require a bite to lead her into temptation.
History professor and vampire Christophe Bakas has brushed off his cat burglar skills to steal a powerful wand for the Vampire Council, but only because they are holding his uncle hostage. When he meets Zaira, he hopes he’s found someone who’ll help with the rescue. But from their first teleportation he’s hooked on more than her flying skills.
The more they learn about the wand, the more Chris and Zaira believe neither council can be trusted with the dangerous device. With both councils closing in, they’re forced to go on the run. Only the vacationing Baba Yaga can make sure the wand isn’t used to destroy the careful balance between witch and vampire kind. If they can find her.
Assjacket, West Virginia here they come.

This is Amazon released only so here's the link:  https://amzn.com/B01MF8NAD7


And just for good measure because I've mentioned the two I released this month. I'm putting   To Capture A Highlander's Heart: The Wedding Night out there just in case there are readers who are interested in the third project I released this year. 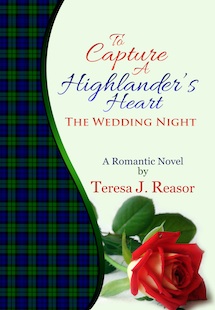 Here's the blurb:
Highland warlord Gabriel Campbell plans to wed Grace MacNab, but is stunned to learn the banns have been challenged on the grounds Grace is a lady by birth. They cannot marry under the king’s law without permission.
The man Grace fears most has come to Caisteal Sith to force her into marriage. And there are others eager to offer for her in exchange for access to the charter the king’s regent has given her, but she’s in love with Gabriel. Though she doubts the depth of Gabriel’s feelings, she’s convinced he’s still the best man to lead her clan and fulfill her heart’s desire.
Can the two stand together to fight tradition and win? Or will their chance at happiness be forever out of reach?

If anyone has any ideas about how to promote all three of the genres don't be shy. Sing them out loud and strong. I'm all ears. And if you've read all my stories or just some of them. THANK YOU.
Without you I wouldn't be able to do what I do.
Read on,
Teresa Reasor

Posted by Teresa Reasor at 9:32 PM

You have been busy. Best of luck with the books and Happy Halloween :-)

Well done on your new releases. Best of luck xx

Good luck with the book(s)!

THANKS SO MUCH FELLOW AUTHORS. I REALLY APPRECIATE IT.