RELEASE DAY FOR DEEP WITHIN THE STONE!!! READ ANOTHER EXCERPT

HAPPY HALLOWEEN!! It is RELEASE DAY for Deep Within the Stone!!! I'm so proud of the book. It's an Adult Beauty and the Beast tale.   Here's the cover and the blurb and below is a new excerpt. 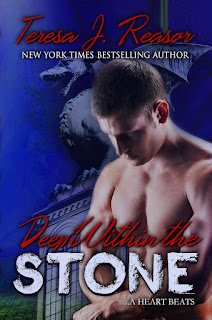 AN EXCERPT:
A wolf came slinking out from the deepest part of the brush, possibly drawn by the smell of fresh blood. His hunger killed by his thoughts, Finn stayed motionless until she crept close. On a whim, he tossed the skinned rabbit to her. Her teeth gleamed white as she caught it in her strong jaws and bounded back into the brush.
Finn slogged to the creek and washed his face and hands in the chilly water. He crouched there for several moments, drinking deeply, and then, looking up, noticed several pairs of eyes glowing from the underbrush. Wolves, possibly a pack. He eyed them with wary concern, then with interest.
Could they end this for him? Could he remain unresisting while they attacked and devoured him? He folded his wings back and bent to rest his forehead against his knee and waited.
The musky smell of their fur was familiar, and took him back hundreds of years. When he felt a muzzle brush against his arm, he froze, though every human instinct screamed at him to leap to his feet and run, and every monster instinct told him to fight and fly.
Sounds came from behind him, wet and nauseating, while they gobbled up the innards of the rabbit. He raised his head a wee bit, and met the golden gaze of a huge wolf. For several seconds they froze, taking each other’s measure.
The feral gleam he glimpsed in other animals’ eyes was absent. Instead, Finn saw a patient watchfulness. Testing the waters, he raised a hand and, curling his fingers so his sharp, lethal nails were tucked into his palm, extended the back of his hand to the beast.
The wolf sniffed it and sat down.
Stunned, the words “What are you?” burst from Finn. “Have ye been cursed like me?”
The wolf shook himself as though to say no. He gave a short, sharp bark, calling his pack together. Finn watched in despair as they followed their alpha back into the woods.
After that one brief contact, they had no interest in further congress with him. He rose and did the only thing left to him.
He flew back to Genevieve’s house.
Careful to avoid large patches of interior lights cast onto the lawn, Finn reached for one of the dingy cloths Genevieve used earlier to scrub his stony exterior. He poured some soap onto the cloth, then studied the knob connected to the garden hose. His overlarge hands, with their deadly claws, gripped the circular metal clumsily, but he managed to turn it.
The sound of running water was evident, but none came out the end of the hose. He gripped the metallic thing preventing the water from pouring. He gave the lever a cautious squeeze, and cold water sprayed out, hitting him in the chest. With a grin, he sprayed himself down and wet the rag, delighting in the process of soaping his hair and body until he was covered with lather. He even soaped the parts of his wings he could reach, then sprayed himself down with the hose before giving a violent shake, scattering drops across the patio. There were so few pleasures left to him, but being clean and not smelling like an unwashed beast was one of them.
After taking a long drink, he returned everything to its place and turned off the water. He had just moved to his spot on the patio when the door behind him opened. In a blink, Finn took his normal position. Only if she came close enough to touch him would she recognize the difference.
Out of the corner of his eye, he saw her check the valve that controlled the water. She paused for a moment to scan the yard. His footprints stood out on the concrete and led right to him. His stomach tightened with part dread, part excitement. What would happen if she discover his secret? She would be terrified, horrified. But after that passed… He didn’t want to think about what she might do. All he knew was the truth of his existence had remained secret for too long.
He tensed to stand, but hesitated when she followed the footprints and came to stand directly in front of him. She was too close. He did not want to frighten her.
He breathed in the sweet scent lingering on her skin and gazed at the long, smooth length of her legs. Without the barrier of the window and the distance, they appeared softer, more well-muscled. The shorts hugged her buttocks and hips, outlining the womanly roundness. His body responded to the sight with a fierce joy and need, and he quickly closed his eyes to block out the sight.
Should he approach her in such a state, she would be doubly terrified. He swallowed against a knot of despair. It took all his control to stay in position.
“Just someone passing by, I suppose. They must have gotten a drink and then left,” she murmured to herself.
Nearby, to the west, a wolf howled, and Genevieve caught her breath and swung around to look.
She rubbed her arms, as though warming herself against a chill, then rushed back inside.
Finn slumped in disappointment. He had been on the verge of alerting her to his presence before the wolf howled and she fled into the house.The wolves he concluded were not wolves at all.