A New Excerpt From Breaking Out! Available October 10th

BREAKING OUT  Book 6 of the SEAL Team Heartbreakers is available for preorder. Release date is October 10th. 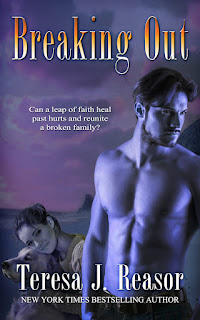 
She pushed the conversation away from her work. “I’ve been reading a little about what you do. Do you really deploy for six months at a time?”
“Yeah, sometimes longer, rarely less. And sometimes we spend weeks training out in the desert, or days training out there somewhere.” He nodded toward the water. “Or twenty-five thousand feet above, like on Monday. But then we’ll have spells where we’re working nine to five just like anyone else.”
“And you can’t talk about what you do.”
“Not where we’ve been, or what we do while we’re deployed, or even some of the training we do.”
Piper wiggled around to look up at him. She couldn’t imagine how anyone lived under such restrictions. “Doesn’t it get lonely?”
“Yeah, it does.” His green gaze shot past her out to the water. “You may want to try to keep your emotional distance and keep things light between us. Six months can be a long time.”
She experienced that dropping sensation in the pit of her stomach again. “Is that what you do, keep things light?”
“I’ve tried it the other way. A woman I was really serious about dumped me while I was deployed. She couldn’t take the separations. And she couldn’t wait to tell me when I got home because she was already pregnant with some other guy’s baby and needed to move on.”
A knot lodged in her throat. “How could she have done that?”
He focused on her, shaking his head. “I can give you quality instead of quantity, Piper. When I’m here with you, I’ll be here all the way. When I’m deployed, I have to be there, with no distractions. Otherwise I might put someone’s life in danger. My team’s, or mine.”
Hearing his dispassionate tone, the hard edge to it, made her ache for him. She’d seen the warmth of his smile, the amusement gleaming in his eyes when he told her funny stories, the generosity he was capable of. He’d saved Gracie’s life and was using his downtime to care for her. He’d offered to install better security hardware at the office. That hard edge didn’t fit in with the rest, but she understood how it had to be because of what he did for a living.
She rested back against him and felt the steady rise and fall of his chest. He was so alive. Had such energy, even injured. He made her feel alive again.
She cupped her hand over his, resting against the curve of her abdomen. She wanted to guide his hand lower and feel his touch between her thighs. The ache of need had her drawing a slow breath. She tried to concentrate on the movement of the water and think of anything else besides that, but her legs trembled and she gritted her teeth so they wouldn’t chatter.
“Are you cold?” Zach’s voice, low and husky, sounded like a growl against her ear.
“No.” She was on fire and he hadn’t even touched her. Just the idea was almost enough to send her over the edge.
She turned to look up at him. The intensity of his bright green gaze pierced hers, his throat working when he swallowed, then cupped her cheek and lowered his mouth to hers. The corded muscles of his neck, lay against her palm, and the rich feel and taste of his lips and tongue tangled with hers.
Piper’s bones turned to liquid, an exquisite lassitude taking possession of her muscles. His erection pressed against her hip. They were both breathing hard when he broke the kiss.
She smiled at his flushed cheeks and brushed her fingertips against his beard stubble.
His hand skimmed up her arm to her hand and he turned his lips against her palm.
“It’s been a long time since I’ve felt this way,” she said.
“Me too.”
She doubted it had been three years for him. The pathetic dates she’d been on. The two men she’d really tried with had been in too big a rush to get to the finish line to realize she needed their patience as much as anything else. The one she’d tried the hardest with dumped her after a month. She had too many hang-ups. She was too much work in bed.
She truly believed it could be different with Zach. She wanted it to be different.
Zach wasn’t a drug-hyped twenty-two-year-old. He had control. He made her feel safe.

Navy SEAL Zach O’Connor was dumped while he was deployed on a high-risk mission, and the fallout from the breakup nearly cost him his career. Never again will Zach allow his feelings to make him lose sight of what really matters. Not even when his attraction to Piper Bertinelli makes him long for the very thing he’s vowed to avoid.

When an overzealous policeman from Piper’s past comes after her, Zach has to make a decision: walk away from the woman who's cracked the shell he built around his heart, or stick by her and possibly risk his career.

And there are other hurdles to face: the family who drove Piper away, but whose secrets may hold the key to understanding why her father was killed.  And someone who’s a greater danger to Piper’s life than an angry cop. The man responsible for it all.