Cover Release!!! They are revealed! Timeless and Whisper In My Ear

My covers are revealed and here are some new excerpts for Timeless and Whisper In My Ear to celebrate. I'm sooooo excited!! They are both gorgeous covers and I think both represents what's between the pages within them VERY well. Pop over to my author page on facebook and read more excerpts from both books.  https://www.facebook.com/SEAL.Crazy/ 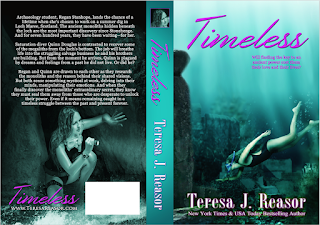 A new excerpt for Timeless:
The trail sloped down, the heavy growth of trees shielding the henge from view for a time. The foliage grew sparser and opened into a clearing.
Loch Maree provided a purplish-blue backdrop to the circle of twenty stones topped by lintels that stretched nearly the width of the inlet. A knoll of ground provided a natural dam holding back the water.
Braden led her beneath the crossbar spanning a narrow path between two of the stones. Atop the limestone altar in the center of the site sat her basket, the long stems of several plants sticking over the sides. The edge of her tartan shawl, bunched beside it, fluttered in the breeze. Braden paused in the shade of one of the slabs, a sudden wary tension in his stance.
Warm moist air looped around them. A prickling sensation fluttered over Coira’s skin as though a lightning strike had just dispersed. The smell of smoke lingered on the breeze. Braden’s grasp tightened upon her hand, holding her at his side.
More curious than alarmed, she ran a soothing hand down his arm. “Be at ease. There is nothing to fear in this place.”
She closed her eyes and embraced the power that lingered on the air like mist. Pulling away from Braden’s grasp, she walked clockwise along the edge of the circle. A low hum traveled through the bottoms of her feet to the top of her head, the vibration intensifying as she neared one particular stone. The Ogham designs carved into the pillar writhed black against the reddish light the setting sun painted upon the slab’s surface.
The air grew still and weighted with moisture. She tasted it, like dew, on her tongue. Her skin grew damp. The sound of the wind, the movement of the trees, her own breathing, ceased. Her ears felt full, as if she had climbed a tall peak and needed to swallow to clear them. What was about here?
“Coira—” Braden spoke behind her, his tone taut with wariness.
An area, head high, on the block wavered like something live wrestled within it. A bulge appeared pulsing, panting, as if the stone were giving birth. A shape thrust forward. Coira staggered back in surprise and fear, a startled cry torn from her.
Shoulders bowed, the figure stretched its neck back as though attempting to relieve the cramped pain of release. The head turned. A strange oval structure covering the top third of the face, a round disk covered the mouth with a black piece as thick as an eel attached to it. For a moment, the form retained the gray color of the limestone in which it was imbedded, and then the stone slid away like liquid leaving the flesh exposed. The features were feminine, her head, neck, and shoulders encased in something gray-black as a seal’s pelt. With a wiggle, and a sound like the release of suction, a single arm and hand flopped free reaching toward her.

Links and the blurb : 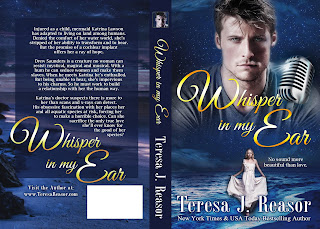 A new excerpt for Whisper In My Ear:

Drew motioned his band members on stage. “Ladies and gentlemen the rest of the band, Loud and Unbound. On drums is Rand Michaels.”
As soon as he reached him, Rand said, “What the fuck’s going on, Drew? You going solo now?”
The drummer’s anger vibrated off him like static. It underscored his unshaven, tattooed, rocker look. His attempts to live up to his own hype were getting old, though. Drew gave him a long look. “The natives were restless. Sam was worried they might damage the club.”
Rand scanned the audience. “They look okay now.” A heavy undertone of accusation sharpened his voice.
Drew controlled his expression, and his anger, with an effort. There was a time and a place for everything. Who knows what an act of violence on stage could set off in this audience? “Take your bow, Rand, and get ready for the show.” Drew threw out a hand toward the other two band members. “On base, Tony Cosimini. On guitar is Simon Fletcher.”
While the men were getting settled, Drew glanced toward the table of women he’d been watching. The blonde was halfway across the room, winding her way toward the door. Her hair swung from side to side, brushing the small of her arrow-straight back, her gait purposeful. For a moment, he was distracted by the lush curve of her jeans-encased hips, and the graceful way they swayed with every step she took. Where was she going?
His stomach tightened. His heart hammered.
She was leaving!
Why wasn’t she affected by his singing like the others? He had to find out. He had to stop her. He dodged the mike stand and leapt off the stage. Women surged to their feet and hands reached for him. Drew tugged free of one woman’s grasp, then another.
A brunette with big hair and a sultry expression ran a hand down the front of his jeans and gave his gear a painful squeeze. Jesus! Grasping her wrist, he pushed her into her seat and shoved past the next two who stood in his path.
His hand closed around the blonde’s shoulder and he swung her around. “Why are you leaving?”
Large blue-green eyes, the color of the sea, focused on his face, then widened in surprise. Her hair, a caramel color streaked with every shade of blonde from platinum to honey, tumbled forward to frame her high cheekbones. Her bow-shaped mouth parted in shock as she shrank from him.
He grasped her arm. “Don’t go.”
A high-pitched sound, piercing and sharp struck him like a blow. Pain lanced through the bones of his face, his teeth. He bent at the waist and covered his ears.
The frosted glass panes in the door shattered, throwing diamond-shaped pieces through the air and across the polished black and white tile floor. He threw up an arm to protect his face and twisted away.
Bedlam reigned as people sitting close by surged to their feet and ran toward the stage.
The sound ceased, cut off as suddenly as it had erupted. He straightened, panting. The aftereffects of the noise had left him dizzy. Even with his hearing blunted from the trauma, he heard the bottles of liquor behind the bar continue to tinkle like wind chimes, as though the glass retained a lingering resonance.
He turned to the door. What the hell was that? Was she okay?
An evening breeze wafted through the empty metal doorframe, carrying with it the smell of car exhaust.
The blonde was gone.

The links and the blurb:

Injured as a child, mermaid Katrina Lawson has adapted to living on land among humans. Denied the comfort of her water world, she’s stripped of her ability to transform and to hear. But the promise of a cochlear implant offers her a ray of hope.

Drew Saunders is a creature no woman can resist: mystical, magical and musical. With a hum he can seduce women and make them slaves. When he meets Katrina he’s enthralled. But being unable to hear, she’s impervious to his charms. So he must work to build a relationship with her the human way.

Katrina’s doctor suspects there is more to her than scans and x-rays can detect. His obsessive fascination with her, places her and all aquatic species at risk, forcing her to make a horrible choice. Can she sacrifice the only true love she’ll ever know for the good of her species?

If you're looking for an excellent contextual advertising company, I suggest you check out Propeller Ads.