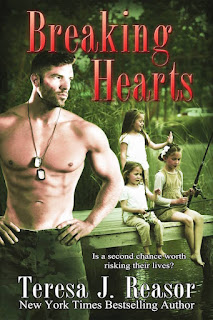 Part of the fun of writing romance is that you get to torture your characters with the promise of something they want and then jerk it away. And with three children to take care of, the cops constantly coming around, and Alayna's ex running around like a poison pen messing things up for them, my characters have plenty on their plates. And I just keep piling it on....
EXCERPT:
“I remember being trapped in the house with them for days at a time while Papa worked. Maybe that made the logistics easier, but being isolated made me crazy. I dreaded going to Mexico every summer. I took off one time and stayed gone for three days to keep from going.”
“What happened?”
“When Moira finally found me, she beat the shit out of me and dumped me at the border.  I had to call my father to come pick me up. I was twelve.”
Alayna couldn’t imagine dropping her child off alone in a strange place and leaving him. What if he’d been kidnapped or killed?  “I’m sorry, Bowie.”
“It’s part of the past. And since my father died I haven’t been back. I haven’t seen Moira in three years, either. I send her money every couple of months to be sure that continues. Besides, that’s really the only thing she cares about anyway.”
She understood what it was like for family to be a burden. She’d chosen to dump her own because of it. “It’s easy to block out what they’ve done as long as they’re out of sight, or you don’t have to communicate with them. But it doesn’t make the hurt go away.”
His silence spoke louder than words.
“I’m determined to be as good a mother as I can be. But after everything you went through, having to care for your brother and sister, I can’t imagine why you’d even give dating me a thought.”
“I never blamed Carmelita or Ciro, Alayna. They had even less control over our lives than I did. Your kids aren’t an issue.”
“They’re a lot of work. If we got truly involved, it would be a lot to take on— on top of what you already have going on in your life. Not to mention all this with Aaron. You need to give it some thought.” She nodded toward Rosa, now limp in her lap. “I’ll be right back.” She laid the toddler in the middle of the bed and pulled a lightweight blanket over her.
Emilia and Addison played a board game at the coffee table, but she suspected they’d be nodding off in minutes.
By the time she had everyone occupied, Bowie had cleaned up and was loading the dishwasher. It seemed all they did together was care for the girls or occupy them. Maybe that was why she hadn’t had a life outside of the children. It was so hard to find time for someone else when you already had three people demanding every part of you.
But she wanted time with Bowie.
She checked that the front door was locked, then went to the refrigerator to get a bottle of water.
Bowie grasped her hand and tugged her toward the back door.
“Is something wrong?” she asked as soon as he pulled the sliding glass door shut behind them.
“No.” He took the bottle of water from her and set it on the table. “I just wanted…five seconds alone with you without kids.” He looped an arm around her waist to bring her in close against him. “Just five seconds to show you that we’re already involved.”
He cupped her chin to raise her face to him. The heat she read in his gaze set her heart to pounding. His lips covered hers in a soft kiss that drained the tension from her limbs and had her melting against him. He leaned back against the house and parted his legs to draw her in closer as the kiss deepened, heating up as their tongues touched and tangled.
It had been so long since she’d been kissed with such passion. A responsive heat flushed her skin and triggered a tempting tingle in intimate places long untouched and unfilled.
When thoughts of the past started to creep in, she quashed them by running a hand under Bowie’s shirt and caressing the smooth skin and taut muscles of his abdomen and chest. He felt so powerful, so male. The wiry teenager with an abundance of sex appeal had matured into a handsome hunk who practically radiated sex, but it wasn’t just the exterior that drew her. It was his patience and strength that sucked her right in.
When his warm palm caressed her waist, her ribs, and cupped her breast, a sensual thrill raced through her, and her nipples beaded, hypersensitive and eager to be touched.  He plucked at one with just the right amount of pressure, and rivulets of sensation trailed downward, building her need to an empty ache.
His lips left hers to find the sensitive hollow between her shoulder and neck. His warm breath feathered her skin, and she shivered. She raked her fingers through his hair, recognized the coarse thickness of it, and turned her mouth to his.
A slap on the glass door beside them caused her to jump. “Mommy?” Emilia’s voice traveled through the glass, though muffled.
Bowie raised his head. She bit back a protest. His passion-sharpened features and the unfulfilled ache inside her gave her a jolt of regret.
“I’m sorry,” she murmured as she pulled away and went to the door.
“Mimi is on the phone, Mommy.”
Alayna’s sensual high dropped so quickly her stomach tumbled, and she placed a hand against it. She pulled open the door and took the cell phone Emilia handed her.


If you're interested in BREAKING HEARTS here are the links and the blurb:

The Blurb:
SEAL Lieutenant Bowie Rivera may have trouble recognizing the many women he’s dated in the past, but when he spots the woman who broke his heart ten years ago, his feelings come rushing back. After a brief, awkward exchange, he tries to escape until three men in a van attempt to abduct her right in front of him.

Running into Bowie Rivera is the last thing Alayna Wieland expects. She searched for him for years, then tried to move on with her life, but never recovered from losing him. And now she has too much baggage to deserve another chance.

Alayna’s ex-husband embezzled millions from not one, but several criminal organizations, telling them Alayna has the info they need to recover the money. With her and her young daughters in the crosshairs, Bowie steps in to keep them safe.

The cops decide to use her and the children as bait to capture her ex. But her ex has plans...plans that may cost them the second chance both she and Bowie long for...and much, much more.

Posted by Teresa Reasor at 8:34 AM

I can not wait to spend time with Bowie and to meet Alayna!

Thanks so much for commenting, Billie. I'm so thrilled for you to do so. I think you'll love him as much as I do.
Teresa Reasor