New RELEASE from Abigail Keam Murder Under A Black Moon!

I love to write, but I also love to read. Most writers do. The more you read, the more it feeds your writing skills because you absorb things from everything you read.  With some books, you may garner small facts. With others, like Sol Stein's book Other People, it can hit you with the weight of an epiphany about style or voice. 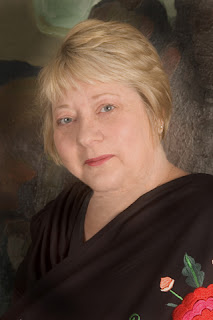 Abigail Keam is a friend who writes Cozy mysteries. I think I've read most of her Josiah Reynold's series. Josiah is an edgy Jessica Fletcher. She's sarcastic and has some hard edges that make her more interesting as a character than Jessica. There are 12 books in that series.

In case you want to check them all out here's a link to her Amazon author page : Abigail Keam Books

Lately, Abigail has been writing the Mona Moon Mystery series. Some of the things that make this series interesting are: it's set in the 1930's during the depression, the main character is a cartographer, a field not many women would have chosen to pursue back then, and the series is set in the state of Kentucky.

Since I'm a native Kentuckian, I love mysteries, and I knew nothing about Kentucky during the depression, but I'm always up for learning about different historic periods, I thought this premise was an original idea and started reading the series.

Murder Under a Black Moon is Abigail's next release due out October 19th. 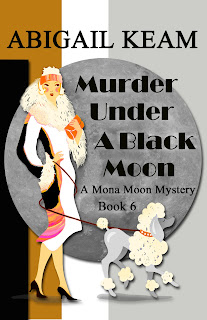 Madeline Mona Moon is not your typical young lady. She is a cartographer by trade, explorer by nature, and adventurer by heart.

She attends the Kentucky Derby with Lord Farley and his guest, the fabulous Alice Roosevelt Longworth, one of the most famous women in the world. To their surprise and dismay, a man is murdered right under their noses. How could they not have noticed?

To make matters worse, Mona's friend, Willie Deatherage, is accused of the murder. Mona insists that Willie couldn't have done it as she never left Mona's side during the race—or did she?

Mona is not going to let her friend go to jail for something she didn't do, but how does Mona find the real killer amongst other suspects at the Derby?

If Mona has to interview every one of the 60,000 people attending the Derby, she will. That's how Mona does things in 1934.

And here's a short excerpt: (Forgive the formating, I'm just learning the new setup with blogspot) 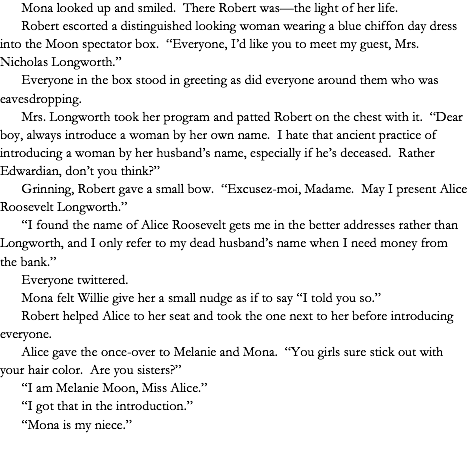 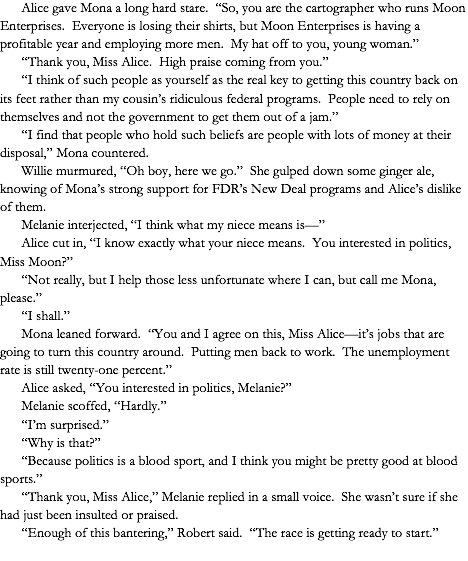 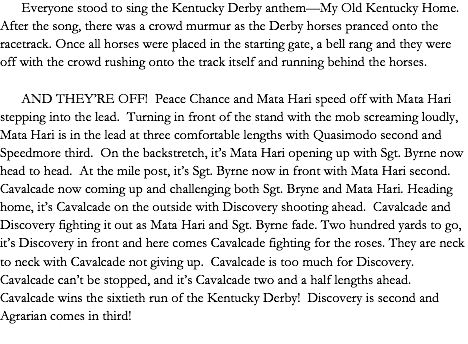 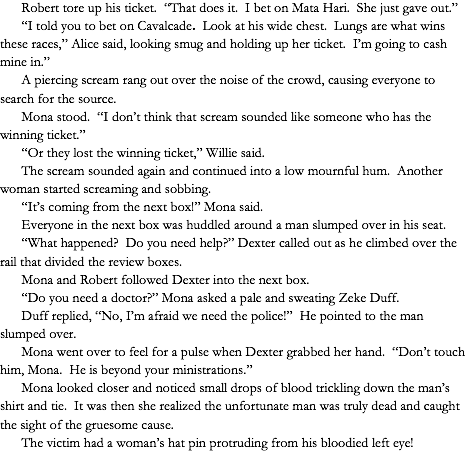 I thought that was an interesting start to the mystery and gave you a flavor of the time period as well.
Here are the links:
Amazon / B&N / Apple / Kobo  / Google Play
Read on!!
Teresa Reasor
Posted by Teresa Reasor at 5:29 PM