Hot SEAL, Midnight Magic is RELEASED!!! It's different than anything I've written so far, so I hope you enjoy it. The lightning strike we experienced here at the house made things a technological challenge but I persevered and I'm really proud of the book.

Amazon / B&N / Apple / Kobo / Smashwords
Navy SEAL Gage Fontenot is home for the first time in two years because his grandmother, who raised him, is in the hospital after a brutal assault. He has four weeks to get the lay of the land, find who’s responsible, and guarantee the attacker gets the punishment he deserves. When he’s met at the airport by Mia, the woman he jilted six years ago, his visit becomes much more complicated. Because his reasons for leaving New Orleans all lead back to her.

But there is more than their personal history in play. She sees danger ahead for them both. But Gage never believed in her gift in the past. How can she convince him to trust it now?

He wasn't the same man she fell in love with, but the strength of his arms around her was comforting. Her head found a spot over his heart. He ran a hand down her back. She looked up at him. His eyes were so dark, the pupils almost blending into the iris, and his lips touched hers tempting and tender.
A heated lethargy suffused her, and she allowed herself to melt against him.

The sweet sweep of his tongue parted her lips and swept in to tangle with her own. It had been so long since she felt such a consuming need to open herself to a man, it was as if her entire being was an empty ache waiting to be filled.

Gage broke the kiss, his cheeks as flushed as hers felt. She looked away feeling vulnerable.

"Tell me when Mason plans to put the drugs in Mama's house, Mia."

Was his reason for kissing her just to get more information? She pulled away, folded her arms, and stepped around him. "I truly don't know, Gage. It might not be Mason who puts the drugs there. All I saw was the police lead you out of the house in handcuffs, then Mama's clock striking ten and starting to play."

His expression tightened, and he turned away.

He didn't believe her. He didn't know who she was and never had.

"While you were in Africa, there was a man named Abeo you tried to help. His entire family was killed. His sons.

Gage swung around to face her and in two strides was there gripping her arms. "Did Mama tell you something? Did she somehow figure out where I was? You're not suppose to know... It's...You could get in trouble if you repeat any of that. I could too, because they'd think I told you. Everything about that mission was need-to-know." His eyes, expresso dark, searched her face.

"Mama's never talked about where you were or what you do for a living. She never even told me you're in the Navy. I'm only telling you what I saw that first day, when I dropped you off at the hospital. I haven't told anyone else."

"Jesus!" He raked his fingers through his thick, curly hair.

"Mama would smack you for taking the Lord's name in vain."

"Neither am I." She was almost amused by his reaction, though she realized the danger to his career if they thought he was sharing military secrets.

He stared at her for a long tense moment. "Dammit!"

"Would you like a stiff drink? I have some bourbon in the cabinet over there." She pointed to the left cabinet with the decorative shelving holding artwork.

"No thanks. And you're being a smart-ass."

"You can't really blame me for a little payback." Her attention lingered on him for a moment, taking in the sculpted scruff of beard that darkened his jaw...the sexy, heavy-lidded, coffee brown eyes so guarded yet expressive...and his heavily muscled body. God, he sure cleaned up good.


Another heads up. I still have my Have Wand, Will Travel Boxset on sale for $1.99. I'll be changing that price mid November. So grab it while you can. 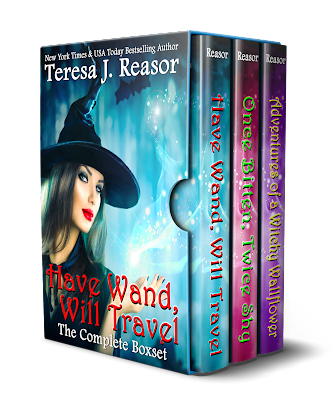 Amazon / B&N / Apple / Kobo / Smashwords
Have Wand, Will Travel:
When the Witch’s council hires Witch Zira O’Shea to find a missing artifact, she can’t refuse. The clues lead her to Vampire Christophe Bakas whose fallen angel's good looks and talents are guaranteed to lead her into temptation and danger while they find the wand and seek to hide it because it’s a danger to both their species. But there’s a problem, the wand has bonded with them.

Once Bitten Twice Shy:
When Phoebe Stewart’s groom poisons her during the wedding ceremony, and her life expectancy falls from forever to a week, “till death do you part” takes on a whole new meaning. When she catches up with her new husband, she intends to stake and roast the traitorous, narcissistic weenie.
Especially now she’s met Hunter Knox, the bad boy alpha vampire she’s been waiting for her whole death.

Adventures of a Witchy Wallflower:
After 50 years of teaching magic-challenged witches, Madeline’s found Jake, the perfect male witch to share a different kind of magic in her life. But Jake has a reputation and money problems. And he’s been offered a hundred thousand dollars to meet Madeline. When he falls in love he has two problems, if Madeline finds out about the money she’ll dump him, if his curse doesn’t get to her first.


Parker Kincade will be releasing her next SEALS IN Paradise novel on December 7, 2021. So if you preorder it.... More yummy SEAL romance!!! 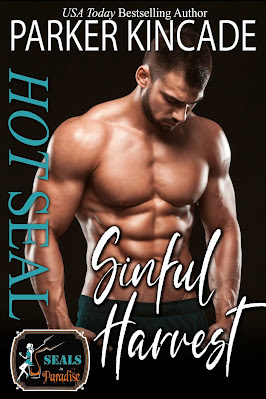 Amazon / B&N / Apple / Kobo
Sinful Harvest:
Cash “Inferno” Mancini is a take-charge, get-shit-done kind of guy. All he wants to do is help his family bring in the fall harvest, eat some holiday turkey, and then get his ass back to his SEAL team. If it weren’t for the new farm manager, he’d be halfway to done already.

Cash had no doubt that Aspen Callaway was put on this earth just to annoy him. With her cheery attitude and touchy-feely management style. With her constant smiles and those pouty lips he’d like to…


I hope you enjoyed the Midnight Magic excerpt. And I hope you'll check out all the latest releases!! And past releases. There are 36 books available. Here's the link: Paradise Authors
Thank you so much for reading my blog. I appreciate all of you.

IGGM.com with an absolutely perfect security system, top service quality and best price is trustworthy, and it is worth the players to buy RPG New World Coins there.