Hot SEAL, Labor Day is Released! Marliss Melton has a new one out too and another excerpt from Hot SEAL, Midnight Magic

I'm glad to report that we have semi-recovered from the lightning strike.

To keep my mind off of that, I've been working steadily on the next book. Deep Within The Mind, book 3 of the Superstition Series.  It's been a long time coming since I got more involved in my SEAL books (LOVE those SEALS) and put off writing the last book of the trilogy. I expect to finish the book mid-November and it will be out sometime in January.  Here's the cover. 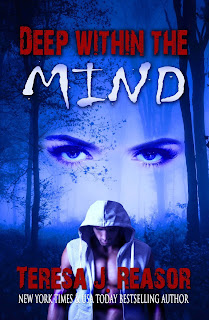 On to other news!! 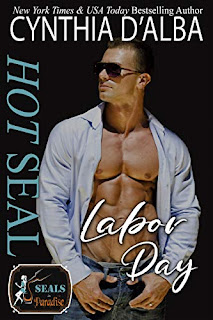 Amazon / B & N / Apple / Kobo
Navy SEAL, Sawyer Beckett, aka Nomad, is a floater, moving from SEAL Team to SEAL Team as needed. He’s the perfect guy for the “get-in, get-out” jobs. Find the problem, solve the problem, and move on is his philosophy on life. He never stays too long nor remains long enough for roots.

For the past twenty-two years, Rebecca Henry has walked on the stage and performed piano concerts for thousands. Now she exhausted, frustrated, and in hiding from her manager, her tour director, and her parents, unsure if she wants to go on.

Where can a woman with serious life problems find a professional problem-solver? Who would have thought it would be on a backroad in California?
If you're interested in checking out last month's release, also by Cynthia, it's titled  Hot SEAL, Sweet and Spicy.
***
Navy SEAL author Marliss Melton is back! U.S. Navy SEALs and FBI Special Agents rub elbows as they delve into undercover roles, investigating crimes of espionage, trafficking, and insurrection! Inside Threat (Deep Cover Book 1) Releasing  September 2nd! 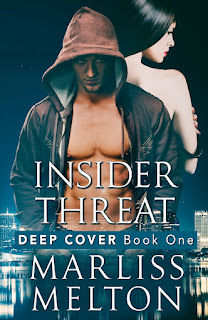 Amazon
FBI Special Agent Kelly Yang takes on a new identity in her first undercover assignment to befriend a suspected traitor. Stunned by her attraction to the Navy SEAL spy, Kelly steels herself to keep their relationship platonic. Yet the more she uncovers about the spy’s complicated past, the more she yearns to prevent his imminent downfall.

Navy SEAL Chuck Suzuki has been living a lie for years. The time has finally come to redeem himself. But choosing Team and Country over ties of loyalty that go back decades puts Chuck in greater peril than his work as a SEAL ever has. Of all the times for Chuck to meet the woman of his dreams—this has got to be the worst.

With the FBI tracking Chuck’s every move and with Kelly’s cover in danger of exposure, how can their burgeoning love affair possibly survive the fallout?
***
My Book Hot SEAL, Midnight Magic will be out September 28th!! It's available for preorder now!
It's 69,700 words of Hot Romance, Suspense, and a touch of the Paranormal and it's set in New Orleans! 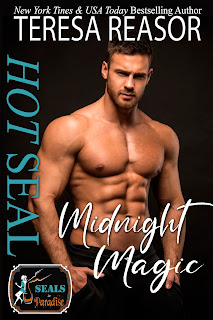 Amazon / B&N / Apple / Kobo / Smashwords
Navy SEAL Gage Fontenot is home for the first time in two years because his grandmother, who raised him, is in the hospital after a brutal assault. He has four weeks to get the lay of the land, find who’s responsible, and guarantee the attacker gets the punishment he deserves. When he’s met at the airport by Mia, the woman he jilted six years ago, his visit becomes much more complicated. Because his reasons for leaving New Orleans all lead back to her.

But there is more than their personal history in play. She sees danger ahead for them both. But Gage never believed in her gift in the past. How can she convince him to trust it now?
HERE'S ANOTHER EXCERPT :
The streetlight cast a weak glow on her car parked beneath it. A sudden bark of laughter up the street startled Mia, and she darted inside the vehicle, shoved in the key, and started the engine. The clock read 2:32 as she shot down the alley and out onto the side street, grateful that traffic was light as she wove her way through the dark streets and caught 1-90 across the river.
If Mama Bet was okay, who else might it be? Who else had she come in contact with that might have triggered this kind of connection?
The twenty-minute drive to Alger's Point and Mama Bet's house seemed to take forever. When she turned into Mama's driveway, Mia realized she had no way to protect herself if the attacker was still inside. But she couldn't call the police and report a crime unless a crime had been committed.
It had. She trusted her ability.
She shoved open the car door, her breaths sounding loud in her ears as she strode up the steps to the front porch of the small shotgun house, past the pale purple passionflower clematis spiraling up the  porch post at one end, its lovely scent perfuming the air. She tugged open the screen door and rapped on the door one time.
The door creaked open.
Darkness stared back at her. Chill bumps raced up her arms, and the hair on the back of her neck stood on end.  With a trembling hand, she reached inside and flipped on the light. Though cluttered, everything appeared to be in its place.
"Mama Bet?"
Her voice was swallowed by the silence. Even the late summer insects seemed to have lost their voices.
Mia took a step inside, then stilled to listen. Nothing. She moved past the living room to the tiny kitchen-dining room. Seeing nothing was disturbed, she flipped the hallway light on. "Mama Bet?"
Silence still. She slipped down the narrow hall to the first bedroom. Sparsely decorated, it looked normal, as did the bathroom across from it. But before she reached Mama's doorway, she smelled blood...
I hope you enjoyed the excerpt.  And I hope you'll check out the latest releases!!
Thank you so much for reading my blog.
Teresa Reasor
Cynthia D'Alba Marliss Melton military romance paranormal romance romantic suspense SEALS IN PARADISE Series teresa reasor